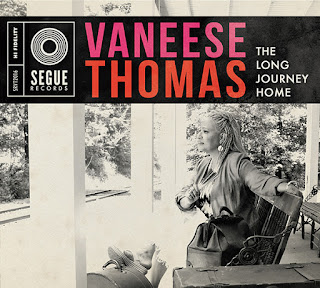 Royalty. The Thomas family is one of royalty in the blues world. Father Rufus was a legend and his son, Marvell, was one of the most important men working on the STAX sound, and daughter Carla was known as the “Queen Of Memphis Soul.”
Youngest daughter Vanesse Thomas has often gone her own way. Sure, she’s recorded several albums as well as singing back up on many more, but she’s also done voice work for television and film and recorded music for various soundtracks.
Even though she had a couple of hits earlier in her career, she didn’t record a lot and has only recently begun to make more albums. I don’t want to call any of these a comeback, because she’s really never left, she just chose a different path to follow.
She released The Long Journey Home on Seque Records in 2016 and I absolutely adored the album and even named it as one of the best of the year. But, of course, I never got around to writing a review of the album.
Sometimes we get second chances. While working on putting together another show, I came across the album again and realized I needed to do right by it. Thomas and her husband and co-producer Wayne Warnecke, have assembled a great collection of musicians and they have teamed up to write several of the songs on the album together. In fact, Thomas has written or co-written 11 of the 12 songs on the album.
You have to love that jazzy funky opening on Sweet Talk Me. Thomas’ voice is so wonderful; edgy and expressive and she can caress a song better than most. She’s got so much soul and when she takes on a song, you just can’t help but admire what she does with it.
The next song, Lonely No More, has a lot of bite in the ballad. Thomas adds attitude to the song and the keyboards emphasize it and takes that attitude to the next level. Her voice is powerful and you can tell that she is not taking anything from anybody.
Thomas follows up with the jumping Sat’day Night On The River. She’s in full swing mode, just having fun. She’s proving that there isn’t any one genre that she sings in, she’s got a lot of different moods and she’s prepared to sing ‘em all. This is a fun song, and I especially love the horn section running with it. Wherever this party is, I want to go!
Next up is Mystified, a darker song with a sense of mystery in the lyrics. This song is one in which Thomas has to reach deeper into her soul to pull out more emotion. The orchestrations are simpler than the song before, and uses the horns more as punctuation. The gospel tinged back up vocals add a lot to the song.
Country Funk lives up to its title with some good old fashioned swampy music mixed with raw funk to create a very cool sound. Once again, the star is Thomas’ voice and I think I just may have to play this again on Time For The Blues.
She slows the pace down for The More Things Change, and you can easily imagine her standing behind the microphone with a small spotlight illuminating her. It’s a beautiful number, the longest on the album, but it’s also one of the most touching and endearing.
The next song, Prince Of Fools, is another personal song that utilizes her voice to its fullest. Thomas has a beautiful lower register and her deep notes reverberate. She can put more expression into her vocals and her lyrics are strong. She’s got real talent and this album belongs in every collection.
She rocks I Got A Man In TN. She’s got a strong blues approach in this song and her voice kicks ass. There’s nothing quiet or subtle about this number, she’s warning you not to mess with her.
For a title like Rockin’ Away The Blues, the song starts out with a slow, quiet, piano and vocal opening. It turns more gospel and takes a turn in a different direction and let me tell you brothers and sisters that Vaneese Thomas carries it home. Peter Calo’s dobro adds a lot of spice to the number. Love this song!
She’s got that old-school feeling with Revelation. It has a little more of that gospel feel but it’s mixed with some good foot-stomping music. Rob Paparozzi adds some wicked harp work to the song. Mean World opens with some good piano work and Thomas’ voice still rings out clear as a bell. She’s still holding on to the gospel feel and increases the fervor nicely. Another lovely song.
The only song not written or co-written by Thomas is her cover of Fleetwood Mac’s The Chain. And while Fleetwood Mac eventually became one of the best known pop machines, they started out as a blues band and managed to hold onto some of that original soul in their music. Thomas finds that soul and does an ethereal cover of the song – making the images dance in our minds. Damn good version of the song.
I stand by my original assessment that this is one of the best albums of 2016. I’m only sorry that I didn’t give it a full review at the time. Vaneese Thomas has a gorgeous voice and I love to hear the many different ways she uses it to express her lyrics.
I haven’t checked lately to see where she’s heading and it may be at least another year before we see her next album, no matter, be patient. If she goes out on the road, you can find her at http://vaneesethomas.com/. Good things are worth waiting for, and searching for.

(Boring part that has little to do with the record being reviewed. Read at your own risk. Really, it’s okay to skip this part. I started this blog several years ago and never thought it would come to mean so much to me. I started out hot and heavy and wrote about a lot of strange stuff and kind of tucked a review into whatever story I was telling. Sometimes I went weeks – or months – without reviewing any of the great music that so many people were sending to the show. I got so far behind that it cost me one publicist’s artists until I promised to get my act together.
Fortunately, the fence has been mended and my friend sends us some of the best music around.
This is the 100th blog post for 2017. 100. That’s more than I have achieved in an entire year. Last year I hit 98 on December 31st, and this year, it’s 100 on April 10. We’ve got a lot more year left to go, and I plan to hit 365 or more by the end of it.
There’s a bunch of people to thank – all of the artists and publicists who send me material; my radio partner Henry Cook, who often finds material in more unusual places, my wife, Mrs. Professor who encourages me to go hole up in my little “office” to write every night; and, of course those of you who actually read this thing.
I’m always gratified and sometimes a little amazed that there is an audience for this thing. Please continue your support, let me know what you think, warts and all, and let’s keep on sharing this great music. Until tomorrow,
The Professor)