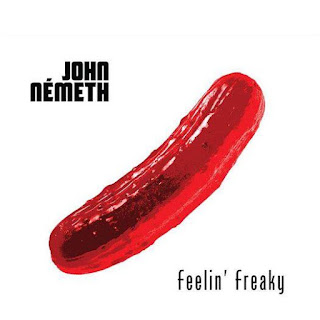 After listening to John Németh’s latest album on his Memphis Grease label, Feelin’ Freaky, you can’t doubt for a second that this is a guy who knows how to have a good time. And if he’s having a good time, he wants you to have one right along with him.
Back in 2016, Németh scored two reviews, one for his album Memphis Grease, and one for a concert he gave at The Tin Pan. Then, if that wasn’t enough, he went and got a nod for having one of the best albums of the year. Plus, we played some of his material on not one, but two shows of Time For The Blues.
It’s safe to say we think pretty highly of the man’s talents and were eager to hear what he’s been up to since then. That amounts to his current album, which covers a lot of territory, both personal and global, and manages to do it all with his signature blend of blues, rock, soul, and funk.
Németh took an interesting approach to the album, bringing in an entire group to work on the material. That group, the Blue Dreamers, consists of Danny Banks on drums; Matthew Wilson on bass and guitar; and Johnny Rhoades on guitar. By working as a group, they achieved a tightness that is sometimes missing otherwise.
Guests included Marc Franklin on trumpet and flugelhorn; Art Edmaiston on temor and baritone sax; Charles Hodges on organ; and J. Kirkscey, B. Luscombe, J. Munson, and P. Tsai on strings.
Németh handled the lead vocals, harp, and wrote all of the songs on the album.
The album starts out with some happy music on Under The Gun, that masks the darker side of the lyrics. One thing that we’ve been facing for some time is finding an answer to the proliferation of guns in this country. Whatever side you may come down on, at least Németh is using his position to state his opinion and maybe we can one day get past the talking stage.
The next song is a celebration of marijuana, S.T.O.N.E.D. Let’s also face some facts, opinions of the substance have undergone a dramatic change in the last 40 years or so, with several states legalizing it and seeing changes in their economy and society. The song itself is downright funky and the band is having a good time. Must be 4:20 somewhere…
Next up is the title track, Feelin’ Freaky, and like I said, this cat has got a wild side. If you don’t believe me, just listen to this track and he’ll tell you himself. He’s celebrating a more hedonistic lifestyle with some funky music. Until now, I haven’t even mentioned that Németh has a deep soulful voice and he plays a mean harp. He does both with style on this song.
Rainy Day is a beautiful song that adds horns and strings to the mix giving the song a full lush feeling. This is Németh at his soulful best, using his voice to paint a picture of his life’s situations. Very nice. I’m sure this one will be played on Time For The Blues soon.
He follows up with You Really Do Want That Woman, another funky tune that uses the horn section to punctuate the number and add some spice. It’s a cool song, and one that I’ve seen go over well with an audience. Németh really gets into the song and his vocals are sharp.
The mellow soul number My Sweet Love, utilizes Németh’s sweet harp and focused vocals to good effect. I really like the song although it is not a blues number, so I may not get a chance to share it. It’s a song that will be on my relaxing playlist for some time to come. I’m amazed at his songwriting versatility, moving from funk to this quiet number.
Despite being a pretty good song, I’m afraid I won’t be able to play the next song, Gave Up On You, because it contains one of George Carlin’s Seven Words briefly at the end of the song. But that doesn’t mean you can’t enjoy this song in the privacy of your own home or car. I like the fat horn section and the more ethereal approach in his vocals. The guitar break is very nice.
Now if you want a quiet Delta influenced number, you might want to skip the next song. However, if you want to get up on the dance floor and move what you got, I suggest you crank up Get Offa That Butt to maximum volume. And when you do, don’t care who might see you – just get up and enjoy the most from your life.
I’m Funkin’ Out starts out with some funky harp and horns before Németh’s vocals take over. It’s a good song, although not my favorite on the album. He plays with the music however and there’s some good work there.
Talking about playing with the language, I’m not sure how he came up with the title, Kool Aid Pickle, for the next song. This is another one that contains one of those four-letter words that the FCC frowns upon, so, I’m sorry to say, I won’t be playing this one either. However, his harp is solid and his delivery reminds me of some of my favorite alternative songs.
He brings the album to a close with Long Black Cadillac. It’s a strong number that combines soul with blues which is Németh’s strongest talent. It’s a number of great pain and loss, one that stays with you for the rest of your life. I can feel the emptiness in every note. A very emotional song and a great ending for the album.
In my estimation, Németh is the Merry Prankster of the Blues and Soul. He is the mythological shape-shifting trickster who pushes us into unusual situations just to see what we will do. He knows where our buttons lie and knows how to push them all.


I’ve been fortunate enough to catch him live and I had a great time at his show. If you find yourself with a similar opportunity, grab it and see what he’s going to unleash next. Whatever he does, it will be done with his whole heart and plenty of soul. You can find his website at http://johnnemeth.com/.
Posted by John at 12:00 AM