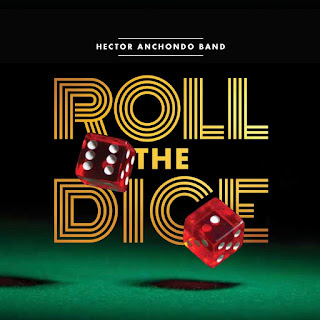 Hector Anchondo and his Band have been making a name for themselves in a variety of places. They were finalists at the IBC in Memphis in 2015 and 2016 and have racked up an impressive number of Band Of The Year Awards while working out of Nebraska.
They tour a lot – usually in the Midwest and Canada, which makes sense given where they live. A lot of those cities they play are great cities, and some have a thriving blues scene, but you have to wonder what would happen if they were located in a larger town. Would they become a breakout band, or would they get gobbled up in the process?
I tend to think the former is more likely. They have a great deal of talent, and I like to think that talent will always rise to the top.
Their latest album, Roll The Dice, an Independent release, recently landed on my desk, and while I had heard of them, I had never heard them. I was eager to give them a listen and see what the judges in Memphis had found so compelling.
The band includes Anchondo on guitar and vocals as well as Khayman Winfield on drums and vocals; Justin Shelton on harmonica and vocals; and Josh Lund on bass. Special guests include Matt Russon on percussion and Eric Stark & Kenny Glover on horns. Amanda Fish adds her distinctive vocals on the opening song.
Anchondo handles most of the songwriting, penning all but one of the ten songs on the album. The one cover is Black Magic Woman, originally written by Peter Green and turned into big hits for both Fleetwood Mac and Carlos Santana.
You have to love Shelton’s harp opening on Dig You Baby. The song is high energy and starts off the album on a run and doesn’t let up for a second. Fish’s vocals just make the song, her voice is honed to a razor-sharp instrument. The driving backbeat elevates the song into a different realm. It’s got to be a killer when done live.
They follow up with Masquerade, a solid number that again makes good use of Shelton’s harp chops. It’s a good song for getting the audience worked up and features some good guitar work from Anchondo. The first couple of songs on the album are ones that will be appearing on Time For The Blues.
Next up is the title track, Roll The Dice, a good blues rock number dealing with the bad luck one often experiences during life’s gambling moments. Nice lyrics and the mix is very tight. It’s an enjoyable song. I’m really beginning to like Shelton’s harp work.
A little rock and roll opens up Face It Down, and this showcases Anchondo’s vocals. He’s got a good approach and the song really makes the most of the rock blues combination. Good work from Winfield and Lund to set the table for both Anchondo and Shelton.
Anchondo and Company slow things down for the more intense Sometimes Being Alone Feels Right. The lyrics paint a bleak picture of a man who has been left alone and he’s trying to make sense out of his world. He just wants to be left alone – no outside intrusions to break his thoughts. Listen for his great guitar break.
The surf’s up on That’s How It All Goes. I love the Dick Dale riffs on guitar and Shelton’s harp answering the pyrotechnics. It’s a good song – very good in fact, but I can imagine some blues purists reacting differently than I did. Love the experimentation, and they pull it off nicely. Jump In The Water has an interesting approach, sounding more like a California Cool song. I like the lyrics and the music is nice. It’s the most different sounding song on the album.
Sometimes a seven-minute song can seem to take a lifetime. Other times, it’s just a blink of the eye. Anchondo’s version of Peter Green’s Black Magic Woman is definitely in the latter category. The guitar work alone is amazing, but when you add in the band’s overall approach to the song, it goes into the approaching greatness category. I love this cover and while I have enjoyed their originals, I am definitely glad they included this one on the album.
Okay, I take back what I said about Jump In The Water being the most different song on the album. That prize now goes to On Your Mic, Get Set, Go. It’s got a lot of old-school country in it and the vocals are much more in a crooning style. I’m not really sure what to make of it, but I can tell you that Shelton’s harp is very good – lonesome and wailing.
The band ends the album with Here’s To Me Giving Up. It’s a slow, languid number that reaches deep down to connect with those darker emotions. Anchondo’s guitar work is amazing and his vocals make him appear vulnerable and humbled by all that’s happened to him.
This is a band that is going places. Aside from their great runs in Memphis, they are constantly on the road. A quick look at their website, http://hectoranchondo.com/, confirms that they are working hard to cover every square inch of the Midwest. I also see a fair number of Canadian dates, and some that are moving west.
I hope that their travels will bring them to some East Coast Festivals or other club dates, because I am curious to see how they do in front of a live crowd. So, please, any of you who have seen them live – whether in Memphis at the IBC, or a club date, let me know your thoughts.


In the meantime, check out Roll The Dice, and if you feel like rolling the dice, trust me, you could do a lot worse that to add the Hector Anchondo Band to your library.
Posted by John at 12:00 AM