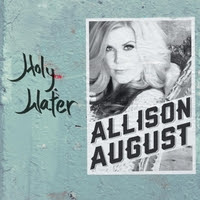 Growing up in a family business can be a joyous occasion, or a millstone around your neck. Fortunately, for Allison August, it was the former as she became a fourth-generation musician who has just released a delightful new album, Holy Water.
I almost always enjoy receiving material from an artist with whom I have no familiarity. It’s exciting, but can be a crap shoot. So many times I hope to roll a hard seven but end up tossing box cars…
Still, it’s the excitement that someone may turn out to the next big thing, or at least pretty darn good. Since I never bother to write about the artists whose work doesn’t move me, you can probably guess that I think Allison August and the musicians that have surrounded her for this album put together a damn good album.
Aside from providing all of the lead vocals, August wrote or co-wrote most of the songs on the album, mostly teaming with her old friend David J. Carpenter.
The album starts out with a real throwback sound of an ancient record player (scratches and all) playing her voice singing, Tai’nt Nobody’s Biz-ness If I Do, before giving way to the modern digital sounds. She’s got a clear voice and her musicians deliver a true honkytonk Mardi Gras version complete with wailing horns. It’s like she stepped out of a black and white world 1940’s record onto a brilliant Technicolor stage. I am enthralled and can’t wait to hear what she does next.
She follows up with a jazzy number, Fireman, that she co-wrote with David J. Carpenter and which features Paul Barerre from Little Feat on guitar. Not only does she have fun with the jazz elements, she gets a little funky with Dino Soldo’s harp and Barerre’s guitar trading off licks at one point. This is not the typical album that makes its way to my desk, but I am glad it made the journey.
The title track, Holy Water, follows, and it too features Barerre on guitar. All told, he will appear on five songs on the album. This is a slow but powerful number as she opens up her vocal chords and gives us a dose of blues that was raised in gospel. The organ, played by Paul Parlapiano, holds the song together and all of the elements combine to make this a remarkable number. August has a wonderful and expressive voice that brings life to each of her songs.
Coco Montoya adds his guitar and vocals to Witness Protection. It’s a darker song and the two singers play off each other nicely. The choppy guitar work gives the song added power and it becomes a gritty rock-blues number. Montoya sticks around for Someone New, and is joined by pedal-steel superstar Greg Leisz. We take a side trip through this country inspired number and once again I’m struck by the proximity of blues and good country music. Not only is Leisz’ pedal steel playing among the best in the world, August’s voice blends beautifully and this could generate some crossover interest for her.
Next up is some serious fun blues on Too Tired. With a blistering Chicago style guitar and horns that punctuate the song, this is a great large band number that would electrify an audience when done live. It’s one of my favorite songs on the album, and will probably be the first one to get played on Time For The Blues. August proves she can shout with the best of them!
She follows with Sticks And Stones, a beautiful number of heartache and loss. Even when August’s voice gains power and soars over the music, you can still feel her pain and vulnerability. It’s a vocal tour-de-force and very impressive.
Sun Don’t Shine is another great rock-blues tune that features Lance Lopez joining August on vocals. In addition, Lopez plays some stellar guitar and Jimmy Z plays some monster harp. This is another song that blues lovers will automatically gravitate towards and that will be making an appearance on Time For The Blues soon.
Jimmy Z’s plaintive harp kicks off Lulu’s Lullaby, and the lyrics paint a beautiful picture. It reminds me of some of the best work by Phoebe Snow – lovely vocals in an undefinable genre. I could listen to this song for hours, and hope to hear more like it in the future.
August is back to being funky with Save My Money. It’s got a real throwback sound to it; kind of bluesy, kind of soul, and with lots of energy from both August and her band. It’s a fun number.
She brings the album to a close with When I Meet The Devil. It starts out so quietly, you might not even be aware that the song started. Barerre’s guitar wakes it up and the song takes on a swampy feel quickly. There’s more of an edge to August’s vocals on this song and it’s a great way to bring the album to a close.
Holy Water is a solid album from first note to last, and I’m glad that August found us and sent us a copy of her CD. I enjoyed it, I like the way she mixes her genres, but never leaves her strength – that voice. I look forward to hearing more from her in the future as she explores that wonderful talent.


If you find your interest piqued, be sure to check out her website and find out more about her, as well as her travels. I’m hoping our paths will cross somewhere down the road. You can find her at:  http://www.allisonaugust.com/.
Posted by John at 12:00 AM