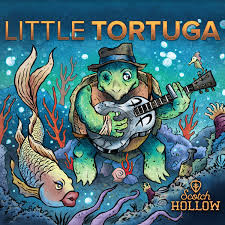 I have to admit that when I pulled this album out of its envelope, I wasn’t too sure what to make of it. I mean, c’mon, a cartoon one-eyed turtle playing a mean slide guitar while under the sea and a beautiful lady fish dancing in response?
Is this a kid’s album? Did I end up on some sort of Raffi inspired chain letter? I dunno.
When I turned it over to see the songs, my eyes immediately went to the three covers on the album. I couldn’t see my way clear for a children’s album to include the likes of Little Walter’s Nobody But You, Howlin’ Wolf’s classic, Moaning At Midnight, or even Blind Willie Johnson’s Keep Your Lamp Trimmed And Burning.
Okay, now I’m intrigued. Maybe this band, Scotch Hollow, has got something that’s just out there, and I’m all about those bands that push the envelope and mix up styles. A little bit of information came with the CD and I discovered the band is a long-time Americana blues roots band out of Kansas City, a town with fantastic music and where the Professor has many friends.
The album is called Little Tortuga, which explains the turtle on the cover, and it comes with a back story. We’ll get to that in just a little bit.
The band consists of Mark Verbeck, songwriter and guitars; Carley Martin on vocals; JD Linn on bass; and Ben Scholz on drums. Special guests include Brody Buster (who took home the “Best Harmonica” nod from the 2017 IBC) on harp; and Joel Schuman on piano.
The album starts off with Hocus Pocus, a quick number that utilizes Buster’s amazing harp. Then Martin’s voice comes in, and damn, she can really sing. She’s got that edge that works so well on blues songs. Yeah, weird album cover aside, this group knows what it’s doing, so settle back and get ready, because anything can happen.
They follow up with Kansas City Pepper, and this one has some very nice dexterous guitar work and a nice bass shuffle. Buster’s harp chimes in here and there to add a little spice. I really enjoy this song, and Schuman’s barrelhouse piano adds a lot to it. These first two songs are definitely going to be on an episode of Time For The Blues.
They get slinky on Drop In The Bucket, with Martin’s vocals becoming a kittenish purr. They are more in their country roots comfort zone, but the song is a lot of fun to listen to, and like just about all the songs on the album, it’s quick and effective.
Too Bad Poor Boy is a fast-paced number that takes on the speed of a runaway freight train. This song is more of their roots style but for those of us who enjoy that, this is a cool song. One of those “damned if you do” songs that are prevalent in country and blues.
Little Walter’s Nobody But You gets the Scotch Hollow treatment next. Buster’s harp makes an appearance and Martin gives the song a beautiful twist with her silken vocals. A gorgeous jazz infused song that I would love to get on the show.
Ok, I said there was a backstory to the title track, Little Tortuga, and here it is. While they were living on a family farm in rural Kansas, they occasionally came across a giant sized one-eyed turtle and it sort of became their mascot. “Turtles may be slow, but they always get to where they’re going,” according to Danny Trejo’s character in Breaking Bad. This turtle became a mascot and an inspiration for the band as they began woodshedding the album on the back porch surrounded by all of nature’s beauty. Eventually they felt the need to immortalize their mascot in song, and this is the result. It’s a fun song, the lyrics are clever, and I really like the Resonator guitar and the interplay between Verbeck (I assume) and Martin is sweet and good.
Honey Baby Why? uses some tight harmonies to introduce the song. It’s got a nice sound, and the music is tight. Nice Americana style with some solid guitar work. They follow up with what may be the strangest title I have ever reviewed on this blog, Bamma Lamma Jamma & Thelonius Dude. However, it starts out with some lovely guitar work from Verbeck. The lyrics use a lot of clever wordplay and I found myself fascinated by the world the song creates.
The immortal Moaning At Midnight, made famous by the all-time great Howlin’ Wolf is next. Once again, they use Buster’s harp and Verbeck’s guitars to usher in the song and Martin’s vocals have their edge back. It’s obvious to me that this band can go in just about any direction it chooses to, and do so successfully. I like their interpretation very much.
Blind Willie Johnson’s Keep Your Lamp Trimmed And Burning gets a wonderful interpretation next. Their down home reverential version is very true to the original recordings and the feelings from the vocals can actually raise the hair on your neck. This is one of the best songs on the album, and one of the best interpretations of Johnson’ song I’ve ever heard.
Scotch Hollow closes out the album with City By The Sea. Verbeck’s guitar gets a workout and the rhythm section sets up a nice driving beat. The harmonies are tight and the song is pure Americana. It’s a good way to end this surprising album. 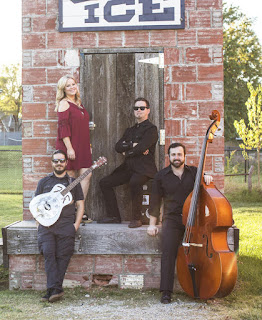 There’s an old admonition that reminds us not to judge a book by its cover. That warning has fallen flat with modern marketing techniques. So, I apologize to the members of Scotch Hollow, and if I ever meet the original source for Little Tortuga, I’ll salute him as well. I stand by my original wonderment of the album cover, but the music, oh the music is sublime.
I’m not sure where or how often they might get out on the road – there are some great places in and near Kansas City to play – but if they do, do yourself a favor and go give them a listen. You can find out much more about the band at their website: https://scotchhollowmusic.com/.


And if you spot an ancient one-eyed turtle crossing the road, stop and tell him the Professor says hi!
Posted by John at 12:00 AM