Trudy Lynn Says I’ll Sing The Blues For You 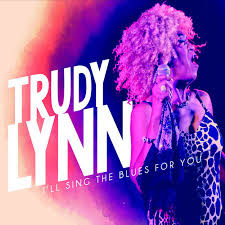 If you happen to like your blues served up with a heaping side of soul, have I got a dish for you. Blues chanteuse Trudy Lynn released an amazing album near the end of 2016 but it’s just now surfacing to me. Maybe it was the holiday mail, the snow, or just my inability to open packages in a timely manner, but despite the reason, I’m just glad it did.
I’ll Sing The Blues For You is a great album filled with her rich vocals and her God given talent to wring every emotion from a note to make her songs so vibrant. I reviewed her previous album at the beginning of 2016, and while I liked Everything Comes With A Price fair enough, it didn’t exactly blow me away.
All that changes with this release. Nearly every moment is magical and I have already earmarked several songs to feature on Time For The Blues. I’m also going to go back and give that last album a re-listen and see what I missed. With this kind of talent, I know I didn’t look at that album hard enough.
Lynn is on Connor Ray Music, a Houston-based label that is already showing great taste in its selection of artists. I’ve enjoyed all of the music that has come our way, and after listening to this one, I can’t wait to hear what’s coming next.
She wrote one of the album’s ten songs and chose great songs from some of the blues giants such as Big Mama Thornton, Lowell Fulsom, Memphis Minnie, and Johnny Copeland. Can’t go wrong with that kind of talent.
Speaking of talent, she’s surrounded by a top notch band including Steve Krase on harp; David Carter on guitar; Terry Dry on bass; Randy Wall on keys; and Matt Johnson on drums. And because his work is so impressive on this album, I want to be sure to recognize Rock Romano’s production.
Big Mama Thornton’s Alright Baby kicks off the album in high spirits. Krase’s piercing harp riff gets things started and the rest of the band joins in with a driving force. Lynn’s vocals growl and give you that feeling that this is a dangerous lady, but well worth the danger. Great way to start.
Lynn slows things down a bit on Lowell Fulsom’s Black Night. Already she’s demonstrating an ability to change things up, she’s very versatile, and also that she can handle stronger emotions. Dry’s bass is strong and Krase, who is rapidly becoming one of my favorite harp players, punctuates the number along with Carter’s guitar. Very strong song. 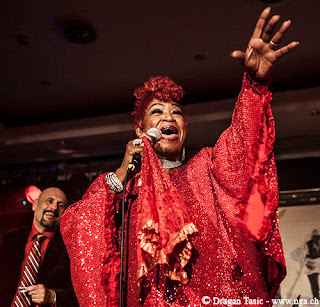 Lynn’s song Thru Chasin’ You ups the funk factor with Wall’s keys setting the mood. We are in some serious soul territory here and the story of a woman who has just had enough is certainly universal. Lynn can hold her own as a songwriter as well as a singer.
Next up is up tempo number with a swinging rhythm, Honky Tonk Song. It’s a fun song that should get even the most reluctant of dancers up and out of their seats. I think I’ve stayed in a few motels like this…
The classic sound of Memphis Minnie’s World Of Trouble gets a small update while keeping the spirit of the song intact. Lynn gets a chance to really show off her vocal range and the band keeps things quiet to let her have every ounce of power from the song.
We get more swing with the upbeat Ramblin’ Blues. It’s one of those classic stories, can’t really stay better be on my way. And walking is just too slow a way to go. Lynn does a great job and her band is in top form.
Still My Angel Child starts off with a nice piano run that sounds differently than the other songs on the album. The percussion as well, it’s just a different feel to it. Not bad, just different. Regardless, Lynn’s vocals carry the song.
The band and Lynn get hot on If It’s News To You, one of those blues songs that kicks major ass. Carter’s guitar runs soar and Lynn’s voice hits that dangerous territory – this is one ticked off woman who is just going to take what her man is doing any more. Guys, you have been warned...
She’s a bit calmer with the more mellow Kissin’ In The Dark. This is the woman who entices you into that special relationship. Just remember she’s also got a dark side that you do not want to cross under any circumstance. Still, if you can play by her rules, it just might be worth it!
She brings the album to a close with Down On Bended Knee, the Johnny Copeland song. This one is major soul blues and her spoken word introduction gives it that confessional old-school feeling. This is such an emotional song and she pulls out all the stops to deliver it.
One old adage of show business is “always leaving them wanting more” and that’s the situations with I’ll Sing The Blues For You. I want more. Ten songs is just a fraction of this woman’s talent and now I feel bad because it looks like we’ll be waiting another year before we get the next one. Well, I’d rather wait for the next jewel than get something quicker that’s not as satisfying.
In many ways, Connor Ray Music reminds me of the early days of Sun Studios, or maybe Stax. They have a stellar collection of artists who don’t seem to mind helping each other out. It seems like they all share their time with someone adding a guitar here, a harp there, or singing backup on someone else’s album. It’s a true spirit of comradery – us against the world. It’s the opposite of some of the corporate material that’s being released, and fortunately for us, their product is consistently good and sometimes even reaches greatness.


If you want to check out some of their other artists, and I suggest you do – post haste – take a look at their website at http://www.connorraymusic.com/ and you just might find your next favorite artist.
Posted by John at 3:30 AM