Tim Gartland Releases If You Want A Good Woman 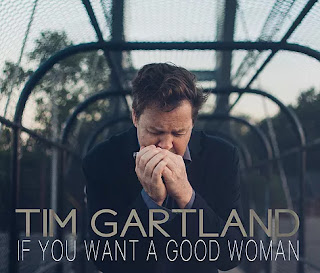 Well, the first official album of 2017 has landed, and it’s a good one. Tim Gartland, a Nashville based artist with whom I honestly had no familiarity with - even though he has release two previous CDs, has released a CD entitled If You Want A Good Woman through Taste Good Music. It’s appropriate that he is working out of Nashville as a couple of songs on the CD have a distinctive country sound to them, and it blends well with his brand of blues.
Gartland is the vocalist and harpist for the band and he is joined by songwriting partner Tom West on piano and organ; Tom Britt on guitar and slide guitar; Lynn Williams on drums; Steve Mackey on bass and acoustic bass; and Wendy Moten providing backup vocals. Kevin McKendree plays piano and organ on two of the songs as well.
Gartland wrote or co-wrote with West all of the twelve songs on the album. West co-wrote five and separately and together they make for a good team.
What The Blues Looks Like is a good opening to the album with a nice harp riff and a solid bass line punctuated by a Stax-y organ. Gartland has a pleasant voice with just enough edge to it to give the song a little danger.  Britt’s guitar lead is tight and plays well with the rest of the mix.
He keeps the tempo moving with Hour’s Worth, a working man’s driving song. Williams’ drums get a good workout and Moten’s vocals give the song a honkytonk feel and this one is most likely a big hit when performed live.
Things slow down a little with I Had It All, but Gartland keeps the intensity level high. This one has a late-night feel to it. The guitar adds a couple of swampy flavors to the proceedings and Gartland’s harp sounds lonely.
Next up is the title track, If You Want A Good Woman, which starts out with almost a reggae feel to it and an optimistic harp run. It shifts a little more into country territory, but the organ keeps its feet planted in the blues.
The tempo becomes slow and deliberate on I Come When You Call. This is one of those songs that grabs you by the soul and doesn’t let go. It’s powerful and the kind of song that just makes you want to hold that special person just a little closer. Oh yeah, you’ll be hearing this on Time For The Blues.
Gartland and company pick things up on Eight Ball, a fun instrumental that serves as a transition from the first half of the album to the second. His harp gets a good workout and mixes well with Britt’s guitar, West’s organ, and Mackey’s bass. Good blues jamming.
If That’s What You Call Love starts the second half with West’s organ taking the lead. The song straddles the worlds of country and blues, but the emotions are there, so just enjoy. He does get a little funky and the edge works for the song. Gartland has a solid harp break that adds a lot to the song.
In what may prove to be the strangest title of 2017, Introduce Me To Your Hat is next, but the solid driving bass line and Stax-y organ makes it a fun song. Gartland follows up with Too Many Groceries, a swinging little number with an old school feel to it. The lyrics are clever and the addition of a little bass harmonica gives a different feel to the song.
Things slow down just a little with Where’s The Cure For You, another clever song that has a late night feel to it. We all have our obsessions and addictions, but not all of them have a solution. Listen for Gartland’s harp break.
The band pays homage to one of the all-time Blues greats on Willie That’s Who. I’m a huge fan of Mr. Dixon and his contributions to the art; Gartland and company take their admiration and put it into a good song.
The album concludes with Go West!, a raucous instrumental that once again showcases just how good Gartland and his fellow musicians are. This is a great jam that would be a showstopper live as each member took a turn driving the song forward. Got to love West’s piano on this one.
This may be the first album of 2017, but it’s a good one and a great way to start the year. I wasn’t familiar with Tim Gartland prior to receiving this CD, but after giving it a couple of listens, I will be eager to hear what else he’s got coming down the road. You can find out more about him and where he will be by heading to his website at http://www.timgartland.com/.
In the meantime, enjoy this one, and remember, if you want a good woman, you have to be a good man. Words to live by.