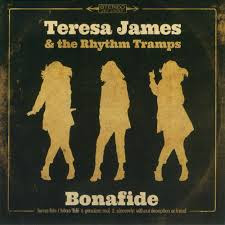 Recently I got a little behind the 8-ball with regards to getting reviews done in a timely manner. Nobody wants to hear my excuses, so I am determined to get caught up and keep up with all the new stuff that’s hitting my desk. Teresa James & The Rhythm Tramps’ new CD, Bonafide, hit my desk back in October and on first listen I enjoyed it.
As a matter of fact, we’ve even played a couple of tunes on Time For The Blues, but over the holidays I sat down and gave it a real listen. Holy Cow, is this a good album. I love her voice, I love her piano playing, and I think she has a unique way of presenting her choice of songs.
There’s no way she’s a rookie at this, and sure enough, I discovered that she has released eight previous CDs. That explains a lot. Few people are this good straight out of the gate. I’m going to have to go back and get the others just so I can see how she’s improved, or if she’s always been this terrific.
Aside from handling all of the lead vocals on the album, James plays piano and she is joined by Tony Braunagel, Herman Matthews, and Jim Christie on drums; Terry Wilson on bass, percussion, guitar, strings, and vocals; Billy Watts on guitar and vocals; Jay Bellarose on drums and percussion; Red Young on organ; Darrell Leonard, Mark Pender, Lee Thornburg, and Ron Dziubla on horns; Mike Finnegan on B-3 and piano; Greg Sutton vocal duet on My God Is Better Than Yours; Phil Parlapiano on piano; Richard Wedler on bowed saw; Sean Holt, Jerry Peterson and Ron Dziubla on sax.
Wilson also served as the primary songwriter, writing ten of the songs by himself and collaborating on one other. The album is bookended by songs from L. Pauling and John Hiatt at the beginning and end of the album respectively.
Oh yeah, James kicks off the album with a rollicking I Like It Like That. She’s got that special growl in her voice that some of the greats had, but she’s also got a nice control that allows her to rock out without sounding like she’s straining. Her piano playing ain’t bad either. This is a great way to start the album!
Next up is the title track, Bonafide, a funky number that James purrs her way through like a lioness. It’s a nice sound, but you know there’s a little danger underneath if you’re not careful. Bellarose’s drums get a big workout driving the number.
She slows things down a little with Spit It Out, and the moderate pace adds a touch of control to the song, and the horn section gives it a swing feel. Finnegan’s B-3 completes the mix and the combination works so well.

We are in solid ballad territory with The Power Of Need, with horns working tightly with the guitar to create a dark mood. James’ vocals are sultry. Wilson’s lyrics are very strong on this song.
The funk factor gets upped on Hollywood Way, a cautionary tale. Hollywood is such a part of the American myth that whole books and songs are dedicated to the dreams it inspires and then crushes. Yes, there is a dark side to those bright lights. Great song.
There’s a real old school swampy feel to My God Is Better Than Yours. Since so much of the blues is connected to the Gospel traditional, it’s a bold choice to use those musical tropes to explore a pattern of prejudice around religion. The fervor in her voice sells the song so well.
The horn section starts off You Always Pick Me Up and sets the tempo as slower and deliberate. This is one of those late-night songs when the singer stands behind a microphone, her soul exposed for the last listeners of the evening. James’ voice soars and you feel this song deep in your heart.
It’s time for the band to get raucous with What Happens In Vegas, which could easily be used by the Nevada Tourism Industry as telling the real story of Sin City. This has got to be a big hit when they perform it live, it’s a fun, driving, barrelhouse style song that will get you moving. Remember kiddies, the house always wins!
Terry Wilson’s bass lays down a tight lounge funk on Too Big To Fail. It’s an interesting song for those who think they operate without consequences. It’s a cool story and I really like James’ voice on this song.
Funny Like That starts out as quiet as a Sunday morning. James’ voice doesn’t use that edge that she employs in many of her songs, it’s soft and comforting. It almost has a country sound, but not quite. It’s a beautiful song and different than the others on the album. She follows up with No Regrets, a song in a similar vein. James’ versatility is amazing – her voice and piano work is outstanding, but for my money it’s her ability to become the song that sets her apart from so many of her contemporaries. Love the sax work.
James and her band rock out on You Want It When You Want It, a woman done wrong song and brother, she is not going to take it anymore. If you’ve ever seen that look, you know just how withering her wrath can be – and if you ever see it in the future – run.
James concludes the album with John Hiatt’s Have A Little Faith In Me, another song that starts out quietly and builds. It’s a song of optimism and of reaching out to connect. Her voice is deep and strong and life affirming.
As I mentioned earlier, this is James’ ninth album. Nine albums, and this is the first one that’s landed on my desk. I either need to get out more and find these great artists, or never leave my house and buy ever CD I can get my hands on. She’s amazing, a transcendent artist who mixes blues and country with a whole lot of attitude to create something new and wonderful.
You can find out a lot more about her and the band at http://www.teresajames.com/ and you can pick up her CDs and find out where she’s going to be playing. If it’s anywhere within a hundred miles or so of where I am, you better believe I’ll be there. She’s that damn good.