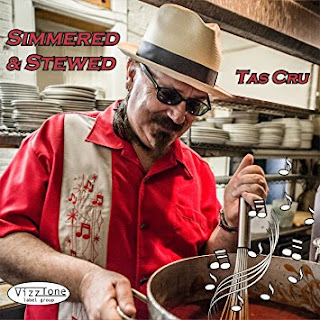 Great artists are always growing, always evolving, always learning new ways to make their art more personal. As a result, when they examine their earlier work (if indeed they do), they often fall into two camps: It is what it is – a product of where I was at the time OR God, I wish I could go back and redo that with what I know how to do now!
With Simmered & Stewed, the latest disc from bluesman Tas Cru, I think it’s safe to say that he is firmly in that second camp.
Before Cru made his last album prior to this one, You Keep The Money, he had made four journeyman albums. On those albums, which contained some of his most requested material, he was still learning his craft. For a perfectionist, everything has to come together; the songwriting, the recording, and especially the performance have all got to blend seamlessly, and in Cru’s mind these albums were good, but now he knew more about what it was he was doing.
In his mind, they all came together with You Keep The Money, and he was eager to apply his knowledge to his earlier work. That’s the idea behind Simmered & Stewed, revisiting some of that earlier work and tweaking it with his more mature approach. The result is a tight 11 song album, with 10 of those songs being written by Cru, and utilizing the talents of several great musicians to find each song’s sweet spot.
Aside from his songwriting and vocal duties, Cru also played electric, acoustic, resonator, and cigar box guitars. He was joined by Dick Earl Ericksen on harmonica; Ron Keck on percussion; Andy Hearn handled the drums on most songs, with Sonny Rock playing on two tracks and Josh Bloomfield on one; the bass was provided by Bob Purdy, three tracks, Joe Goehle, two tracks, Chris Wroblewski, three tracks, and Mike Lawrence on two tracks; Jeremy Walz played guitar on four tracks; and Chip Lamson handled most of the piano and organ work with David Liddy and Guy Nirelli playing on two tracks each. The background and additional vocals were provided by Mary Ann Casale, Alice “Honeybea” Ericksen, Jenny Macri, Meaghan Janovsky, and Montana Rodriguez.
Dat Maybe gets the album started quickly by jumping into the song feet first and never letting up on the pace a bit. You know that this is just a tasty morsel that lets you know you are in for a tasty feast. The pace doesn’t slow down on Grizzle N’ Bone, a romping honkytonk number that charts the falling of the relationship. It’s a great song that is sure to get you up and moving.
Next up is Feel I’m Falling, a slower, more intense number in which Cru’s voice softens and he wrings out emotion in every note. I really like the guitar work on this song and it’s got such an element of sadness. Very good work.
Time And Time is a slow languid gentle song that uses the most of Cru’s expressive voice. Ericksen’s harmonica takes the song into a solidly wistful direction and Cru’s guitar sets the stage beautifully. One of my favorites on the album.
Cru and company picked up the pace with the funky Road To My Obsession. This another fun song that plays a little with the blues genre, mixing in some other styles to create something unique.
They go very old school with Biscuit, starting off with just voice and harp before bringing in the rest of the band. Once they join in, it’s a fast-paced ride of epic proportions. Cover My Love is another old-school honkytonk of a song. The pace is quick and the lyrics are clever. It’s a real crowd pleaser.
I absolutely love the swampy feel to Woman Won’t You Love Me. The mix of a Resonator guitar, piano, and harp just has that one of a kind sound that has got to stir the soul of any blues fan. Just let this song wash over you and enjoy.
Cru starts out Just Let It Happen with bass and vocal before adding drums and building the combo feel. The background vocals choir gives it a little gospel flavor before bringing in the piano. A fun song with a great philosophy behind it.
Tired Of Bluesmen Cryin’ is the only song from this album that we have played previously on Time For The Blues. It’s a darker song with deep emotion and Cru is in great voice for this number. Loved it then, and I still love it now.
The album closes with the only song not written by Cru, Higher And Higher. The beautiful guitar opening is perfectly complemented by the gospel flavor that follows. Once you’ve heard the song this way, you’ll love it even more. Truly a wonderful interpretation.
With Simmered & Stewed, I’m not sure how easy it will be to find the earlier albums by Cru. I understand he won’t be restocking them, so if you do find one, latch on to it and you’ll be able to chart his growth as an artist. There’s a lot to admire about Cru and his work, not only as a performer, but as an ambassador for the blues going into schools and introducing kids to the beauty of America’s music.
But that’s a story for another time and I promise you, I will be delighted to tell it.
In the meantime, be sure to check out his website at http://www.tascru.com/ to find out where he will be playing and to pick up whatever albums you can. It’ll be worth the investment and I’m sure you will enjoy them as much as I have.