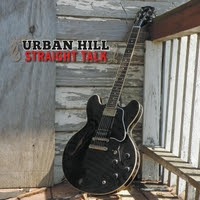 Just when I think I know all the players in the Commonwealth of Virginia, I get an e-mail from a man named Paul Urban telling me all about his band’s latest release, Straight Talk. I am immediately intrigued as I realize I don’t know everybody and I better get back on the job. Especially since two phone calls to friends in the Tidewater area sing their praises long and loud.
Okay, Mr. Urban, let’s see what you got.
I didn’t have to wait long as a couple of weeks later, while attending the River City Blues Society’s holiday party and big time jam session, my friend Greg Willard points out a large man hanging out at the bar. “That’s Paul Urban,” he says. “He’s got a great band…”
A few minutes later I’m deep in conversation with a man who was only recently on my radar, and he’s telling me all about his band before reaching into his briefcase and handing me a copy of the new release. I wait to watch him jam with the Forrest MacDonald Band and damn if he didn’t do a great job.
Listening to the album it quickly became clear that he wasn’t bragging by any means, if anything, he undersold how good they were. I missed catching them live due to holiday commitments but am looking forward to seeing them either in my neighborhood, or I may just head their way.
Urban Hill is named after the two principals in the group: Lathan “Pudgee” Hill on vocals and guitar and the previously mentioned Paul Urban also on vocals and guitar. Hill has been kicking around the blues for years and has some serious chops on both vocals and guitar as well as being a very good songwriter. Both he and Urban wrote all twelve of the songs on the album.
The rest of the band consists of Kevin Yoder on bass; and Dennis Livreri on drums. Joining them as guests are Robert Logan on harp and William “Mobetta” Ledbetter on organ.
I like the drumsticks counting off Night Train as it gives you the feeling of a live band. The song drives forward nicely and it could very easily get the audience out of their seats and onto the dance floor. You don’t get much more blues that trains and women who done you wrong…
The band follows up with a slow number, Busy Streets, that’s a reminder of what old folks say.  Nice to hear Voltaire quoted in a blues song. The emotion is very strong here, and the pain of loss is palpable.
They pick up the pace a little with Sir George, and the guitar leads really smoke. It’s a short instrumental that showcases the band’s musicianship. Urban Hill then goes on a blistering tear with Little Bunny, a flat-out blues number that just might leave you shaking your head at its virtuosity. I really like this song a lot.
It’s like the band decided, oh yeah, let’s kick it up a notch and get funky on Dead Of Night. Ledbetter’s keys add a pinch of spice to the proceedings and the guitar is cool and choppy. They keep the funk going with Worried Dreams. It’s interesting to listen to the different styles of songwriting between Hill and Urban. Hill seems to be more traditional in his approach while Urban likes the down and gritty approach.
Speaking of Hill, the next song, Moaning And Weeping, is one of his and the tempo drops to a much slower pace with more emphasis on the vocal. This could easily have been a song handled by a small combo on a honkytonk stage and would still get the last stragglers to hold each other close in the dark.
Just to switch things up, the band employs a very different feel to Things Are Changing. Perfect title for the change in tempo and the percussion that gives it a jazzy feel. Yeah, they get into blues territory with the guitar break, and it has a good flavor to it, just different.
Urban gets more traditional on Not Going Down, adding Logan’s harp to the mix. This one is about as old-school as you can get and it’s a strong song. This one should appeal to even the most dedicated blues purist.
The last three songs on the album belong to Hill. Café Thelonius has a ‘70’s soul vibe to it, and is very cool. Another jazzy instrumental, it shows the band has a great deal of versatility and could conceivably handle just about any style of music if push came to shove.
Next up is a funky bluesy anthem, Her Mind Is Bad. I guess I may have to eat some of my earlier words as Hill is in decidedly different territory with these last two songs. And he navigates that territory like he’s been living in it for a long time.
Urban Hill brings the album to a close with the title track, Straight Talk. This one is definitely old school with just a voice, brushes on the drums, and a distant muted guitar carrying the opening. Hill’s voice is in particularly good form on this number and the effect is chilling.
If you find yourself intrigued, as I was, check out their website at http://www.urban-hill.com/ for all the details regarding this album, their previous release, and of course their upcoming performances. If you find yourself anywhere near them in the future, grab that opportunity to see them, be sure to take it.
You just might find me sitting back at the bar taking it all in!