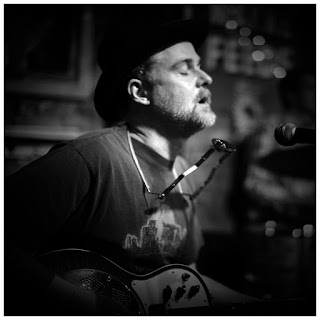 The Reverend Freakchild was revealed to me a couple of years ago, and I will admit that at first I didn’t know quite what to make of the man. Maybe two or three songs into that album, it was as if the scales fell from my eyes and I could see how he was using the blues to reach the spirits of his audience. He wasn’t imitating anyone, he wasn’t parodying anyone; he was reaching out to those in pain and offering hope in his own unique way.
Now, his way may not be yours, so don’t follow blindly. But I think if you listen to his approach, you’ll find that his path is not so much different than many who have gone before him. There is a long history of men and women preaching the blues and using the spirit that connects us all to the divine to reach out to each other and help those in need.
That’s the message of Reverend Freakchild.
This is a brave album. Recorded in what sounds like one take, the album is just Freakchild, his guitar, and his harp talking directly to his audience and then singing the song that reflects his message. There are no overdubs, no flashy pyrotechnics, just a man, a voice, and a mission.
Holy Breathing Blues is the good Reverend turning loose on guitar and harp, being that one-man salvation band that so many blues preachers did from pulpits or on street corners to gather an audience and begin the service. This is his own call to the faithful.
Preachin’ About The Ancestors is the first preaching that acts as an introduction to each song. They are generally very quick, but also insightful. Listen up sinners.
The Blind Lemon Jefferson song See That My Grave Is Kept Clean is the song for the ancestors as well as to the generations to come. It is a faithful interpretation that is somehow still uniquely his.
Preachin’ About Life And Death continues his theme about life and death and the ways the two are intertwined. He also mentions his work embracing Christianity and Tibetan Buddhism to arrive at his philosophy.
The traditional song, In My Time Of Dyin’, receives the Reverend’s treatment and his slide work is very good and mixes well with his harp. He works himself into a small frenzy on this song, almost willing his audience to follow him.
Preachin’ About The Silver Lining / Preachin’ Blues is next up and he talks about how every darkness contains light. He follows up with the Son House classic and he discusses House’s relationship with Robert Johnson before launching into the song.
One of Prince’s best known songs gets the treatment in Preachin’ About The Philosophical Investigation / Kiss. Say what you will about Freakchild’s approach, he has the ability to take songs that might not be considered blues songs, and transform them. Of course, many of Prince’s best work has the blues at their hearts, so maybe the Reverend is just bringing the songs back to their origins.
The next mini sermon and song, Preachin’ About Luxury Problems / All I Got Is Now is one of Freakchild’s originals and he takes on those material things and what is truly important. His lyrics are strong and his rough voice intones and calls out to be heard. Very good song.
Next, he turns to a very short intro and the traditional song, Preachin’ About Time / Wish I Was In Heaven Sitting Down. It’s one of those songs that he could get the congregation to join in and raise their voices to the heavens.
The Reverend ends up this particular part of the show with a nod to the Reverend Gary Davis with Preachin’ About Enjoying Your Time On Planet Earth / It’s Gonna Be Alright. Davis was one of those performers that Freakchild looks up to and this is a good way to end this portion of the album. All the previous songs were recorded live with no overdubs in Portland, Oregon. The song is infectious and you can’t help but smile and feel a little uplifted by it.
The encore, Grinnin’ In Your Face, is delivered without a mini sermon and was recorded in Germany. However, you can hear how appreciative his audience was as he takes on the song a cappella. Say what you want about the Reverend, he’s a fearless man in his approach to reaching out to people. He may be an acquired taste, but you must admit that when he’s firing on all cylinders, he’s a lot of fun, and he sure as hell knows his blues!


If you want to learn a little more about the Reverend, be sure to check out his website at http://www.www-reverendfreakchild.org/ and you just might find yourself a disciple at the church of the almighty blues! If you look closely, you’ll find me in the front pew.
Posted by John at 4:00 AM