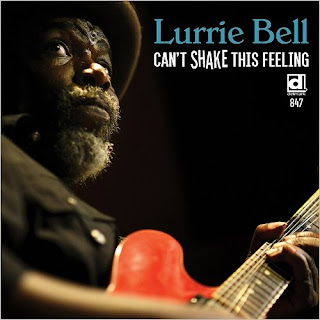 If there were every someone who was born to play the blues, it would have to be Lurrie Bell. Son of the well-regarded Carey Bell, he picked up a guitar at the age of five, taught himself how to play, honed his chops by studying the musicians around his father, perfected his techniques while steeped in the gospel traditions of church, and eventually became the artist he is today by playing alongside the likes of father Carey, Koko Taylor and others before setting out on his own path.
Along the way, he formed the group Sons Of Blues with Freddie Dixon and Billy Branch and has been a major proponent of keeping the blues alive and thriving.
His most recent album, Can’t Shake This Feeling, which was released last year on Delmark, has been nominated for a Grammy Award and since we’ve featured him recently on Time For The Blues, I thought it was only fitting to give this album a closer look.
Aside from Bell who handles the vocals and guitar, the album features: Roosevelt Purifoy on piano, organ, and Rhodes; Matthew Skoller on harmonica; Melvin Smith on bass; and Willie Hayes on drums. The thirteen songs that comprise the album include five that were written or co-written by Bell.
Other songwriters include Eddie Boyd, T-Bone Walker, Maxwell Street Jimmy Davis, Willie Dixon, Milton Campbell, Oliver Sain Jr., Lowell Fulson, and Buster Benton.
The album starts off with a little swing on Blues Is Trying To Keep Up With Me. The title seems autobiographical and Bell’s growl of a vocal and the sweetness of his guitar combine to make this a great song. Purifoy’s piano is a great touch, as is Skoller’s harp.
Bell counts off the intro to Eddie Boyd’s Drifting and the band comes in with a vengeance. I don’t think there’s any reason to point out how Bell and company deliver an old-school sound, since they are old-school. If you are the blues lover I think you are, you are going to dig these songs a lot.
Next up is T-Bone Walker’s blistering I Get So Weary. Bell is screaming out the emotion from this song and his band stays in a slow but powerful groove. What a classic number delivered by an amazing performer.
Skoller’s harp and a different sounding guitar take us into Maxwell Street Jimmy Davis’ One Eyed Woman. The sound is stripped down to the barest essentials and sounds like it would have been a perfect fit on Maxwell Street itself back in the day.
Next up is a Bell original, This Worrisome Feeling In My Heart, and the guitar is lush, and the distant plaintive piano pulls us into the slow blistering nature of the song. This is a slow, deep song of dark emotion – and Bell has certainly known his share of that. Whatever darkness has been in your own heart and soul, this song speaks directly to that battle. Beautiful song.
Sit Down Baby, the first of two Willie Dixon songs is next. This one has a nice swing to it and the band is very lively. It’s full of Dixon’s playful songwriting and Bell is a great interpreter of Dixon’s work – after all he grew up around him, it only makes sense.
Milton Campbell and Oliver Sain Jr wrote the follow up song, Hold Me Tight. It definitely cooks and Purifoy’s keys get quite a workout. The rhythm section of Smith and Hayes hold the song together on this and the other songs so far. Sometimes bass and drums don’t receive the recognition they deserve, but without them most songs would be weaker.
The Lowell Fulson, Lloyd C. Glenn classic, Sinner’s Prayer, is next and Bell gets a chance to pour out his emotions through the lyrics. Those who have battled the darkest of demons can so identify with this song, and Bell delivers a powerful take on it.
Next up is the title track, I Can’t Shake This Feeling, another Bell tune. The band delivers a strong performance and Bell has a very good guitar break to carry the song. They follow up with Born With The Blues, an autobiographical tune that Bell wrote with Buster Benton. This is a slow, intense number that features some very good harp work by Skoller in support of Bell’s vocals.
Bell’s father Carey is represented with his song Do You Hear. The song kicks off in third gear and the band swings with it, never slowing down for a second. It’s a fun track and a nice tribute to a great performer. The Bells teamed up on a number of recordings and performances so I imagine it was a cathartic experience for Lurrie Bell to take on this song.
The second Willie Dixon song, Hidden Charms, is next and the band is up to the task. Bell’s vocals turn gravelly and Skoller’s harp adds flavor to the mix. It’s a good solid number that should appease just about every blues fan imaginable.
The album concludes with Faith And Music, Bell’s collaboration with producer Dick Shurman. It’s an introspective number that uses the barest essentials to tell Bell’s story. The quiet approach tells more than the words do, and this is basically his philosophy in three words. It’s a song that hits you with a solid gut punch.
There’s not much more to say about Lurrie Bell. He’s a hard working man – this album was recorded over a period of about three days and if you find yourself in Chicago, you’ll probably find him playing somewhere and then after his set, he’ll pack up and go sit in with someone else’s band.
Pull out just about any 10 albums from your collection and Bell probably played on one or two. He’s not only born to the blues, he’s one of its strongest protectors. And this is one damn fine album that definitely belongs in your collection.


Check him out at http://lurrie.com/ for more information. You won’t be sorry.
Posted by John at 3:30 AM