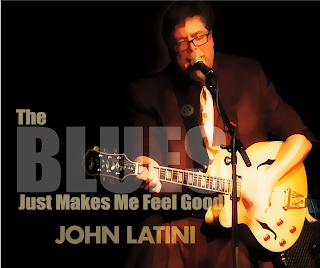 One thing I can say about John Latini’s new album, The Blues Just Makes Me Feel Good: Damn! This guy has an amazing voice, a resonating baritone that handles blues, soul, and good old fashioned rock and roll with ease. It’s one of those voices that you can get lost in the layers and you discover subtle nuances with every re-listen.
That’s not even mentioning his guitar playing. He handles that with alarming simplicity – while the runs he uses would be daunting to the average player, he has the dexterity and style to make it all look easy. Throw in his songwriting skill and you have a three-tool player who has all the makings of a top tier talent.
So far, this CD has been my only contact with Latini, but after listening to it, I feel confident that he is one of those performers who finds a way to connect with his audience – whether it’s live or via the album – and brings them along on a great musical ride. In many ways he reminds me of an early John Prine or Steve Goodman with his troubadour style story songs, and also his stylish turns of phrase.
On The Blues Just Make Me Feel Good, Latini wrote all but two of the thirteen songs and he handles the lead vocals, plays guitar and percussion.
Latini is based out of Michigan, a state with a long connection to the blues. Many of the early players worked their way up to Detroit where they worked day jobs in the auto industry and played the blues at night. A lot of country players did the same thing, and somewhere along the line they cross pollinated and heavily influenced each other.
This album follows those lines.
Aside from Latini, the other musicians include Nolan Mendenhall on vocals, bass, and percussion; Brian Roscoe White on guitar and percussion; and Todd Glass on drums. Horn arrangements are by Al Hill on two tracks and Ross Huff, Nolan Mendenhall, and Latini on three. Special guests include Jamie-Sue Seal and Greg C. Brown on vocals; Neil Donato and Dale Grisa on keys; Ross Huff on trumpet; Tim Haldeman on sax; and Bethanni Grecynski on trombone.
The song that starts off the album, Black-Eyed Blues, employs a nice guitar riff to get us into the song. At first, it seems like it’s going to be a little autobiographical as Latini describes what he can do musically.  Suddenly it veers off into left field as it describes the consequences he endues for being out all night. Fun lyrics.
Next up is the gospel infused, Lord Made Me A Weak Man. This is a song with some seriously strong emotion. I really like Latini’s vocals, they are very strong. Neil Donato does a nice break on the keys.
Latini follows up with a slow languid blues number Three AM. It’s the first song on the album not written by Latini. This one is penned by Dave Boutette. There is a nice build up to the crux of the song along with a good back beat shuffle with the rhythm section. Talk about your metaphors…
The next number is the only other one not written by Latini, but this one is written by a relative, Michael Latini. Woodchuck Blues is a down and gritty number with a whole lot of swampy overtones. It’s a cool story song that features Elvis and his black Oldsmobile versus a woodchuck.
Just to prove he can get a little funky, Pull Me Up fires up the keys and horns to give you the kind of groove that makes you want to move. It may have a strange title, but Rutabaga Cheesecake is a very swampy number. The thrust of the story is Baby’s gone and the cupboard’s bare. Talk about your metaphors…
Next up is the title track, The Blues Just Makes Me Feel Good. It’s got a nice sweet moderate pace with just a little swing. It’s good to have a blues song that is kind of optimistic. Broken Man uses a similar moderate pace that builds to a swing before dropping back. Latini is experimenting with a few different styles, but they are all unified by his playing and his voice.
Some of the best lyrics are in My Town’s Got A River And A Train. It has a languid, slow build and a true swampy feel. The picture he paints is desolate, but that makes this such a wonderful blues song.
Latini switches gears on Gotta Have My Babies, a swinging up tempo number. This song is dedicated to all of the women he loves. This one has got to get them out on the dance floor. He follows up with a song with a cool little swing beat, Too Good To Be True. This one has some very nice harmonies.
Do you remember the story of how Roy Orbisson matched the beat of Pretty Woman to his wife’s walking out of the house? Here, Latini’s Walkin’ Woman has a nice driving beat and you can definitely hear the footsteps in the drums. Nice touch at the end.
The album concludes with a clever song, I Will Be Haunting You, a swampy number of what he’s going to do after he’s gone. It’s a good way to end things, but if you’re like me, you might just hit that repeat button for another go-round.
So if you would like to get in on the almost ground floor of a man who is a rising star in the blues, check out his website at http://www.johnlatini.com/ to pick up this first blues album (he also has some other tricks up his sleeve) or to find out where he’s going to play live.