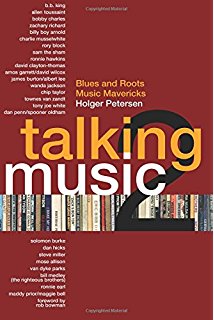 Try as I might, I’m not sure that I will ever get used to reading a book on an electronic device. As a life-long insomniac, I am well acquainted with large stacks of friendly books piled up on a table beside the bed, waiting to entertain me or enlighten me as I wait for sleep that often doesn’t come until it’s nearly time to get up.
My long-suffering wife has finally given up and buys book lights by the dozens as well sleep masks to keep the light out of her eyes as she falls asleep faster than my Uncle Mort after a large meal…
But when there is something I really want to read, like Holger Petersen’s new book, Talking Music 2, I will take it in any format I can get. As it was nearing the final stages, and since I was being such a pest, the publishers, Insomniac Press, authorized Petersen’s representative to send me an electronic version.
I sure am glad they did as this was a great book, filled with interviews of Blues and Roots Music Mavericks (that’s on the cover, so I felt I better use it). If you are not familiar with Petersen’s work, well, it would take a few days to cover all of his accomplishments, so here are the highlights:
A life-long music fan, he is the host of Canada’s longest running blues radio show; he was the co-founder of Stony Plain Records and recognition for the label includes Grammy Award nominations, W.C. Handy Blues Awards, Juno Awards, Canadian Country Music Awards, Maple Blues Awards and Western Canada Music Awards; he was the founder of the Edmonton Folk Music Festival and served as its chairman for three years; his first book (Talking Music) was published in 2011; and he’s even found time to be the drummer for Spiny Norman's Whoopee Band and Hot Cottage.
He’s won more awards than you can shake a stick at, including many of Canada’s highest awards for contributions to Canadian culture.
If I ever grow up, I think it’s safe to say, I want to be like Holger Petersen. 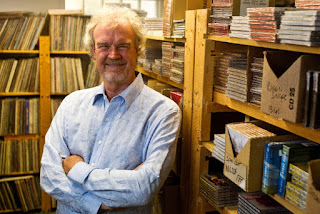 Talking Music 2 is a great collection of conversations and interviews with some of the top names in the blues and roots music world. Aside from so many remarkable household names, there are in depth talks with other names, many of whom are notoriously shy around the press and therefore reluctant to discuss any aspects of their work.
Petersen conducted many of these interviews around the Edmonton Folk Music Festival – several in front of an appreciative audience – and others on his radio shows. As a music industry executive, he was able to talk to these artists on a different level – that of a peer rather than as a journalist looking for some sort of juicy story – and as a result was able to ask different questions and receive deeper answers.
He also talked to each of his guests as an enthusiastic fan appreciative of their work. It was obvious that these interviewees were at ease in his presence and enjoyed talking about their work to someone who understood what it was that they did and had a working knowledge of the artistic process.
Petersen’s interviews included conversations with B.B. King, Allen Toussaint, Bobby Charles, Zachary Richard, Billy Boy Arnold, Charlie Musselwhite, Rory Block, Sam the Sham, Ronnie Hawkins, David Clayton-Thomas, Amos Garrett, David Wilcox, James Burton, Albert Lee, Wanda Jackson, Chip Taylor, Townes Van Zandt, Tony Joe White, Dan Penn, Spooner Oldham, Solomon Burke, Dan Hicks, Steve Miller, Mose Allison, Van Dyke Parks, Bill Medley, Ronnie Earl, Maddy Prior, and Maggie Bell.
Where else are you going to find a line-up like that?
The stories are quick, engaging, and full of information for the casual fan and the ardent student alike. By having an electronic version, I found myself pulling out my phone whenever I had five to ten minutes of peace and quiet and could quickly immerse myself in someone’s story. It was blissful and I found myself slightly changing my opinion of reading books on a device rather than as pages between two covers.
Talking Music 2 is a welcome addition to my library of books about the music I love written by a man whose work I admire. I recommend it highly – in any format – and if you love the music and want to hear some stories I guarantee you’ve never heard before, pick up a copy tout de suite.