Eight O'Five Jive Takes Us For A Ride On Swing Set 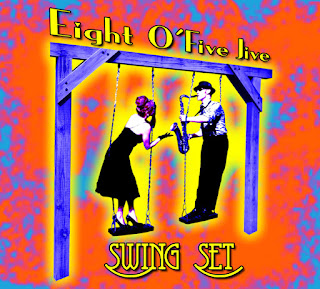 Let me tell you something, even the grayest of days will be better if you listen to Eight O’Five Jive. This Nashville-based quintet has just unleashed Swing Set, their second CD, and much like the first, it is a sophisticated blend of humor, swing, and most of all good clean adult fun.
Led primarily by Lee Shropshire’s vocals, she is all decked out in vintage wear, cat’s eye sunglasses and a beautifully lacquered beehive ‘do; much of their work rests on her thin shoulders. If she can’t deliver, then the band might be reduced to being another set of posers hiding behind style without any substance. Don’t fret though, because she more than possesses the chops of a great performer who can deliver a song like the ladies of old – with plenty of sass to drive you wild.
One of her main partners in crime is Andy Scheinman on guitar who takes the lead on so many of the songs, driving them in the right direction. The other members of the band are: Bill Bois on bass; Duane Spencer on drums; and Patrick Mosser on sax. The first time I heard Eight O’Five Jive, I actually thought they were a bigger band because of the richness in their sound. It’s a testament to their playing that they are able to make such incredible music with a stripped down line up.
While the band plays a number of songs from the ‘40’s and ‘50’s in their live shows, on Swing Set, they have written all of the songs save one. They have managed to create new songs that ring with the same smartness that those earlier songs possessed, and that’s not an easy task by any means. I was impressed by the fact that the songwriting credits on the majority of songs include all of the members of the band. To me this shows a great deal of respect for each individual’s input in crafting a song.
The album gets off to a rollicking start with Make Mine A Double, Mosser’s sax sets the mood on this homage to drinking. Some of the lyrics sound more like a liquor store shopping list, and Shropshire’s voice purrs through the song. If this doesn’t get you moving, I don’t know what will.
The band follows up with Ragged, again using Mosser to set the table. The rhythm section of Bois and Spencer get a workout and Scheinman’s guitar punctuates the song.
Next up is Get Away and Scheinman and Mosser trade off a couple of leads before Shropshire takes over the song and makes it hers. It’s a fun song, and one that’s made for dancing, or at least boogie-ing our way to the bar… 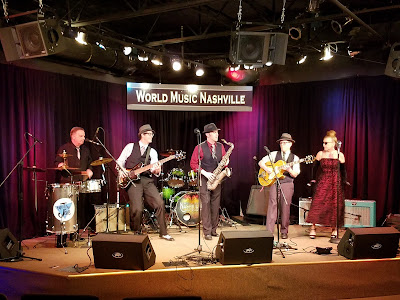 The band uses a little call and response to set the mood on Put It Back. By now, Eight O’Five Jive has established that they are one of the best swing bands working today. I admit a certain fondness for swing sounds, and they have such great control over the music and Shropshire’s vocals set them above and beyond.
Recalling those great almost scat singing chanteuses, Never shows Shropshire at her best at controlling the song. Mosser’s sax gets quite a workout on the break followed up by Scheinman’s guitar. This has got to be a killer song when done live.
Perhaps my favorite song on the album, I Won’t Wear Flats (To Your Funeral) starts off almost dirge like, but quickly morphs from a feeling of loss to almost euphoric empowerment. Ah, forget that “almost” this is a woman who is glad you are dead and she is going to be a knockout while attending your funeral!
They slow things down just a bit with One More Glass of Wine and Shropshire’s voice softens and becomes even more intoxicating. This is a beautiful late night song, the kind where there are only a few people left in the club hanging on to each other while waiting for the evening to come to a close.
The only song on the album not written by a member of the band, My Mumblin’ Baby, is a fast-paced number that is a perfect fit with their originals. Watch Out For Their Wives is a swinging tune, no surprise given that title. It can serve as a warning for those women who find themselves involved with a married man. Of course, it could also be a warning for those married men. Either way, watch out for those wives… The guitar and sax are a little disjointed making the sound more dangerous than normal. Very slick!
Back of My Hand starts out with a driving rhythm followed by Shropshire’s soft vocals become edgier and harder within a few seconds. This is a woman who is not going to take any crap off any man. Do not underestimate her or you will be sorry.
The album ends the way it began, with an ode to imbibing, A Little Bit of Bourbon. This swinging number takes us out on a high note. What a great song to either start or end a show. The rhythm is infectious and you just can’t help but be happy and shake and move whatever you got.
When you listen to Swing Set, everything seems to fall into place nice and tight, but that effortless sound is obviously crafted over some seriously hard work. But don’t let that fool you, just kick back and have yourself another highball and tune the volume up and the world out.
I can’t yet attest to how good they are live, but if their two albums are any indication, they are smoking! I don’t get to Nashville very often, but I think a road trip just might be in order. If you want to check them out, point your browser to http://www.eightofivejive.com/index.php and you can get their CDs or find their touring schedule.
If you like your blues on the swinging side, you definitely want to make their acquaintance!