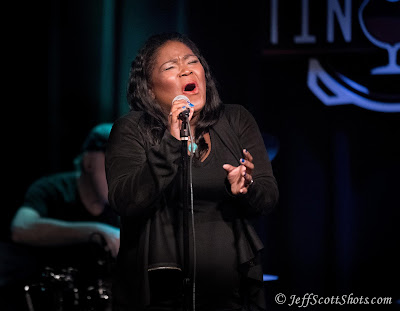 How often do you get to sit in the presence of somebody who is that damn good? Shemekia Copeland flew into The Tin Pan in Richmond’s west end with her four-piece band and proceeded to wow the enthusiastic crowd with her signature blend of blues and soul. Despite her diminutive stature, Copeland has a commanding presence and all eyes were riveted on her during her high energy two-hour set.
Opening the show with the title track from her recent Alligator release, Outskirts Of Love, it was immediately evident that Copeland was in great voice and her songs were going to be powerful throughout the night. This was borne out with the next couple of songs, also from Outskirts, Crossbone Beach, which featured some very nice slide work from Ken “Willie” Scandlyn, and The Battle Is Over.
The first of several goosebumps inducing songs, Married To The Blues followed, a smoking, blistering number that made more than one person come to their feet in appreciation. It was at this point that Copeland began talking about her pregnancy (seven months and counting – she joked that the band has threatened to start wearing scrubs to shows as they expected a delivery soon and wanted to be prepared).
She then launched into Somebody Else’s Jesus, a standout song from her 2012 Telarc release 33 1/3. After which she proved that she is a “full service blues singer” by delivering a great version of her father Johnny Copeland’s Devil’s Hand.
With both Jesus and the Devil satisfied, Copeland then unleashed Dirty Water with some great double slide work from Scandlyn and Arthur Neilsen. Neilsen has been working with Copeland for approximately 18 years and he and Scandlyn are a formidable pair trading lead and rhythm throughout the night. They were joined by a rhythm section comprised of Kevin Jenkins on bass and Robin Gould III on drums.
Copeland and her band got many people out of their chairs and on the dance floor with her tribute to Koko Taylor which included extended guitar breaks with Scandlyn and Neilsen trading licks to increasing applause from the audience. She then slowed the tempo down with the spiritual Lord Help The Poor and Needy.
She then wound up the audience with the gospel flavored Big Brand New Religion which led to another standing ovation for her. Winding up with an amazing rendition of Ghetto Child in which she stepped away from the mic and walked the entire audience reaching out to every single person in the room and singing without any amplification other than her amazing voice. She would often punctuate the lyrics with comments to different individuals, especially when she zeroed in on one audience members’ cheesecake.
This lead to a prolonged standing ovation as they ended the night and listened to the cheers before coming back for a rocking version of It’s 2 A.M. (Do You Know Where Your Baby Is?). By this point, the audience was totally in love with Copeland and would have gladly stayed longer just to be with her. Once again the Tin Pan has brought in a major talent to the Richmond area and with their close up and intimate seating, those lucky enough to catch their shows know what a special evening it can be.

Be sure to check out the photo from Jeff Scott Shots that accompanies this review. Scott is an amazing photographer with some great action shots. I have admired his work for some time and am delighted that he agreed to let us publish one of his photos here. Hopefully we’ll be able to feature his work more prominently – and if you like his work, reach out to him. He’s great! Discover for yourself at http://www.jeffscottshots.com/.