New Blues Revolution Drives To Hellendale And Back 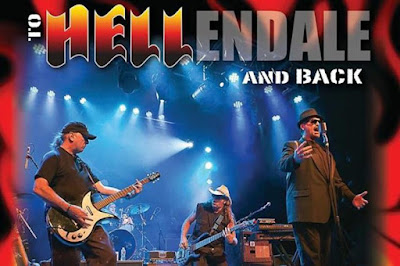 Let’s address the elephant in the room, the New Blues Revolution’s sound is reminiscent of The Doors. Not the slick, heavily produced Doors, but the down and dirty pre Whiskey A Go-Go Doors when they were playing for five hours a night in dive bars while looking for their sound.
These guys are raw, and since they use the more traditional guitar-bass-drum-vocal arrangement as opposed to the Doors’ guitar-keyboard-drums-vocal set up, there are major differences. But still, vocalist Bill Grisolia shares certain qualities with Jim Morrison and he is paired with several good musicians including Chap Cooper on guitar; Roger Beall on drums; and Bob Burns on bass.
They play like they are in a crowded bar on the Texas Mexico border, or perhaps like they belong on a Quentin Tarrantino soundtrack, but these guys have style. A dark style that pulls you in to a different world altogether.
This is not your daddy’s blues and it certainly isn’t your granddaddy’s blues, but it’s blues with a post punk attitude. And as much as I liked this EP (only five songs on TO HELLENDALE AND BACK), I’m left wondering, can they sustain the mood over a full album or even more?
The world of music is populated by scores of bands that came out of nowhere with a flash of lightning only to disappear just as quickly. While they have released a previous album, unfortunately I have yet to hear it, so I can’t tell how it sounds or how the band has grown.
I can tell you that this is an exciting find and I will definitely be watching them in the future to see how they grow. The combination of Grisolia and Cooper is exciting to listen to – and I can only imagine how they would be live. There are several videos available on their website: http://www.newbluesrevolution.com/ which also has more information about their upcoming appearances.
Souls On Fire kicks off the album with a nice drum cadence leading into the murky dark guitar and Grisolia’s growling vocals. The lyrics are challenging – not the kind of “my girl did me wrong” lyrics, but the kind that struggle with much deeper implications. Cooper’s guitars add menace and Beall’s drums keep a steady beat that lures you in.
Whiskey Town takes a different approach, but still uses a slow steady rhythm to pull you into the song and possibly the bottle at the same time. Grisolia’s vocals are really reminiscent of Morrison on this song, and are just as hypnotic. This is more trance than blues in its approach, but as far as attitude is concerned, it’s the depth of the blues. Amazing song.
They pick up the tempo a bit with Black Widow without losing any of their bite. The New Blues Revolution has some of the cleverest lyrics I’ve heard it a long time. They have a fresh approach and as I’ve said, they are not for the blues purists, but if you’re looking for a band that rocks their blues, this is the group for you.
Baby Blue starts off with a little surf rock beat with a border town shuffle. Grisolia is not only a master of the growl, but he can croon with the best of them. When he puts the two together he creates a wild sound that gets under your skin.
The EP ends with an instrumental, Sunset Psycho Twang, which reminds me somewhat of a reworking of Fleetwood Mac’s Albatross. The song is evocative and subtle. So much of what New Blues Revolution has done on the album falls under the darker side, that it’s refreshing to hear a song that is on the other side of the spectrum.
I mentioned earlier that I had not heard their first CD at this point, but as I write this review, the band has been gracious enough to send me a copy. So, I will get this review posted and hopefully in a few days get a chance to listen to their earlier work and post a review of that.
In the meantime, if you feel so inclined, head over to their website that check out their samples and buy an album or two. Be adventurous.

I know that I will never catch up to the influx of albums that have been arriving lately. Frankly, I Kind of like it that way as there is always something new to explore, some artist to discover, and to see what some of my favorite artists are up to.
When my friends at The Tin Pan, in Richmond’s lovely West End called to tell me that they had a concert coming up with Bruce Katz and his band, I was delighted. Katz is an amazing keyboardist of the highest order and his work on the B-3 is not to be believed. He had been in town a few months ago, but I was tied up with some function or other and couldn’t make it.
We made arrangements for his latest album, HOMECOMING, to be sent to me and even though it’s a 2014 release, I wanted to be sure to talk about it prior to Katz arriving in town. 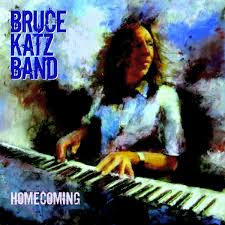 I don’t have much of Katz’ previous work, but what I’ve heard impresses me very much. He loves to incorporate other genres into his music, primarily jazz, and it gives his work a certain flavor and definitely a unique sound.
The musicians include Katz on Hammond B-3, piano, and vintage Vibe electric piano; Chris Vitarello on guitars and vocals on The Sky’s The Limit; and Ralph Rosen on drums. The trio is joined by guest artists John Hammond on guitar and vocals; Jimmy Bennett on guitar, lap steel guitar, and vocals; Randy Ciarlante on drums and vocals; Marty Ballou on acoustic bass; and Peter Bennett on electric bass.
Katz wrote or co-wrote seven of the songs on the album along with selections from band members Randy Ciarlante, Jimmy Bennett, and Chris Vitarello. He pulls others from the likes of Lightnin’ Hopkins, Elmore James and Leroy Carr. With writers like these, you know he’s got a fighting chance at a great album.
Starting off with the title track, Homecoming, Katz establishes a groove that allows for some interplay between guitars and keys. You can tell right away that the album is going to have some jazz overtones, and while some purists might not like it, he’s pushing boundaries and making good music.
Next up is King Of Decatur with Ciarlante handling the vocals. It’s got a strong funk flavor and the kind of song that should be a real crowd pleaser when performed live. The break is a lot of fun with Katz tearing up the piano.
Lightnin’ Hopkins’ Santa Fe Blues gets the Katz and Co. treatment. This time John Hammond and Marty Ballou take the vocals. The piano is pure honkytonk, the kind that just makes you sit up. This is great old school style blues that will make anyone happy.
No Brainer is a collaboration between Vitarello and Katz. It’s an instrumental that allows the band to find new ways of expressing themselves musically. The interplay between Vitarello’s guitar and Katz’ B-3 is solid and it’s obvious that these two are having a lot of fun laying down this track.
The next song, Amelia, starts off with a great piano lead and that helps to keep the song in a lighthearted vein. It’s a fun song that might not be for everyone as it is jazzy and at six minutes for an instrumental, some attention spans may lag. If they do, they should be listening to something else, because Katz finds way of putting subtle touches into his runs as if they are waiting to be discovered after several listenings.
Next is the Elmore James tune, Wild About You Baby, which gives Jimmy Bennett a chance to shine on guitar and vocals. They even recorded it so that the song sounds vintage (in a good way, not with scratches and pops), and the piano complements the guitar nicely. One of my favorites on the album.
Another Katz original, The Czar, is next. He’s working the organ pretty hard, and he and Jimmy Bennett create a darker mood. It’s one of those late night jam feels when the band is winding down but still playing. There’s no singer to take over the song and whatever the band feels is what they play.
The Leroy Carr classic, Blues Before Sunrise, is next and Katz gives it that old school feel and John Hammond’s vocals are spot on. This version could stand up with any previous covers of the song and will appease even the staunchest of critics.
Time Flies is another Katz original and it has a funky jazz feel right off the bat. Vitarello gets quite a workout and his guitar is outstanding on this number.
Speaking of Vitarello, he wrote and provides the vocals for The Sky’s The Limit, a fun number that gives him a chance to croon a little. The song gives you the feel of a guy in a suit just hanging behind the microphone and giving the band a chance to jam out a little on the breaks. Great song.
Time to get nice and funky with Just An Expression, a hard driving number that makes you want to get up and move. Katz wrote the song, but Rosen arranged it and I’m sure he added a lot to the strong rhythm and back beat. This is the kind of song you know will get a great response when you get a chance to catch the group live.
Katz’ keys gives Won’t Last Till Tuesday almost a film noir feeling at first then transitions into a more jazzy feel. There’s something menacing about the song and yet enticing as it brings us into a different, dark world. It’s the last of the Katz’ compositions on the album.
The album concludes with It’s A Bad Time, penned and sung by Jimmy Bennett. It’s more of a non- traditional blues tune that evokes some of the messages of older numbers while exploring new ways of presenting the song.


For more information about Katz and his going-ons, be sure to check out his website http://brucekatzband.com/BK/home_news.html. But make sure you get your reservations in early at the Tin Pan for what is sure to be a great show at http://www.tinpanrva.com/. While you’re there be sure to check out some of their other great shows coming up.
Posted by John at 7:28 AM No comments: