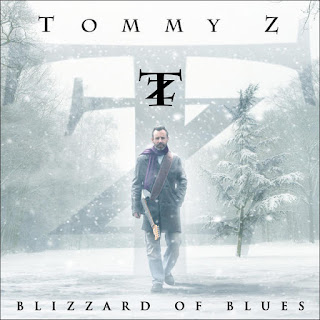 Tommy Z’s Blizzard Of Blues hit my desk just before the big snowstorm hit. I very cleverly thought it would be the perfect time to play the title track on Time For The Blues.
Get it? Blizzard Of Blues during an actual blizzard?
Trouble was, it was such a blizzard that it was impossible for me to get into the station to record the show and the album ended up getting shuffled down the pile as I dealt with some other issues.
Man, am I glad that I pulled it out to review now so I could re-live some of those amazing guitar runs that Tommy Z plays. He’s obviously a genuine guitar wizard and he can play up a storm!
Get it? Storm?
Okay, last weather related joke, I promise. Otherwise I am officially an old fart, and most old farts could not possibly appreciate playing this fine.
Now, about the name, Z. In America, we pronounce the letter “ZEE” and it gets lost amongst other similar sounding letters like “CEE,” “GEE,” and the like. So I will differ to my British teachers who always called the letter “ZED” like it is pronounced in other languages. It’ll make me feel better.
Anyway, Zed wrote eight of the nine songs on the album, only My Eyes (Keep Me In Trouble) was written by someone else. He worked with a handful of musicians including Stanley Swampski, Walt Riggo, and Jerry Livingston on bass; Damone Jackson on drums and percussion; Kevin Urso on organ; and Jeremy Keyes on harmonica.
This is one hard-driving album that showcases Zed’s diverse talent. If he is this good on a disc, I can only imagine how good he is live. He’s got to just burn the place down.
The album starts off with the old school sounding Lovergirl, thanks in part to Keyes’ harp work and Zed’s straight ahead delivery. Zed and the band love to add in some jamming to give the song more of a live sound, and it just reinforces that this is a performance band, not just a recording band.
The swinging Going To A Party follows up with a blistering back beat and some simple but fun lyrics. This is a great party anthem and the kind of song sometimes you just need to make it through a rough time as it reminds you that good times lie ahead.
The group slows things down considerably for Memory Of Love, a power ballad in which guitarist Zed gets to pull out some magic to go along with his haunting vocal. Urso’s organ work is exemplary in holding the song together and allowing the guitars to go off.
They keep it slow and powerful for Blues For KP, that showcases both Zed’s vocals and his guitar. They have stripped the sound down to the basics: bass, drum, and guitar to keep it old school. It’s a well written number and one that stays with you and the use of the extended jams works in its favor.
Things pick up with Bags Of Cool, an up-tempo swinging instrumental that gives the four major instruments and their musicians a chance to stretch out just a little bit.
They kick it into over drive with the title track, Blizzard Of Blues, a great metaphor for the way the blues seems to just fall on us. Rainstorms are good, but temporary, blizzards are nasty and stick around for a while. This just shows how clever some of Zed’s lyrics are and he’s not just a flashy guitarist.
There is a quiet power behind Miracle, a gospel feel with the sustained notes on the organ, and Zed’s voice starts out quiet and builds. The lyrics are some of his best. This is my favorite song on the album, it’s the kind of song that gets a hold of you and transports you to a better place.
The only song Zed didn’t write is My Eyes (Keep Me In Trouble), a nice bouncy number that reminds us that wandering eyes can cause more damage – but sometimes it’s worth it. After all, if you don’t keep looking at art, how can you appreciate it? It’s fun and I can imagine the group having fun with this number live.
To end the album, Zed and company put together a beautiful instrumental, Al’s Groove, which showcases just how wonderful four instruments can sound. It’s jazz and blues combined into a delightful jam that just underlined the talent of these musicians. It was a fitting way to end the album, just letting the music speak for itself.
I admit that I wasn’t familiar with Tommy Z’s work prior to this album although I have since learned of his extensive background and his previous CDs and plan to make every effort to catch him live at my earliest opportunity. You should consider doing the same. He’s an incredible musician and you can find out more about him at his website: http://www.tommyzband.com/.