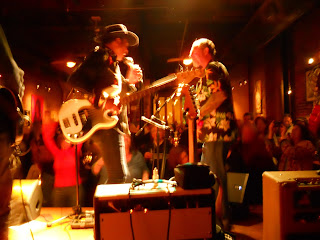 Sometimes a cold night can bring out the hottest show. Long time concert goers in Richmond know that every once in a while we get a reputation for not being the hardiest of souls. When it snows, people laugh at us because we can’t drive. Hell, sometimes when it rains, they level the same charge at us.


And when it’s cold outside, no one shows up to see a show.


Don’t tell that to the sold-out crowd that packed their way into downtown’s Capital Ale House to catch the CD release party for Benny Turner that also featured legendary guitarist Bob Margolin, and that indestructible force of nature known as The Nighthawks.


Separately, each of these artists were worthy of a trip out on a cold night, but together it would have taken an act of God to keep me away.


Benny Turner is one of those nice, quiet guys that’s been around the industry for years. Aside from being Freddie King’s younger brother (he played bass for King for years), he established himself as a sideman and band leader for Marva Wright as well as many other blues, soul, and gospel groups.


It has only been recently that Turner has let the spotlight shine on him (as was in evidence last night as he encouraged the other artists to take extended trips to the front while he was content to just play bass for them.


Benny Turner is a class act.


The show kicked off with a set from the DC based Nighthawks and they proceeded to take the opportunity to get the crowd into the show. The four-person juggernaut is comprised of Mark Wenner, Paul Bell, Johnny Castle, and Mark Stutso. The Nighthawks have a long and storied career in their own right and have even recently had their history featured in a new full length documentary.


After their set, the audience was primed and ready for the main event, and after a very short wait were rewarded by the return of the group and the addition of Bob Margolin and the man of the hour, Benny Turner himself. 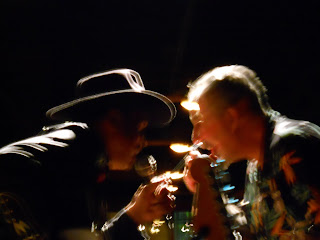 
Turner blazed through a couple of songs from the new CD, When She’s Gone (previously reviewed here) and then launched into a version of Hideaway which was made famous by his older brother. I can honestly say that I don’t think I’ve ever heard a finer version of the song, including the original, than I did last night. Big Brother Freddie must have been throwing in some extra help from the afterlife because this was a divine interpretation.


From that point on, Turner could do no wrong as he played his heart out, sang, and even walked out into the audience singing (without a microphone) and playing bass at several tables and even on the dance floor.


He continued the pace for the next hour or so, with some of the most soulful sounds you can imagine. His take on Bill Withers’ Ain’t No Sunshine was a showstopper with Margolin’s guitar blistering the song and giving it an indelible stamp.


Let me pause to ask a simple question. Why is Benny Turner not headlining major festivals across the world?


Turner is not just an excellent musician, he’s not just an amazing singer, he is a flat out entertainer who knows how to work a crowd and give them a performance that they will never forget.


If you ever get a chance to catch this man, do not miss the opportunity. He will have you enthralled with the magic of his performance. But until you can catch him live, make sure you pick up his CDs and enjoy those.


Thank you for a great evening Benny, and hopefully we’ll catch you back here soon. 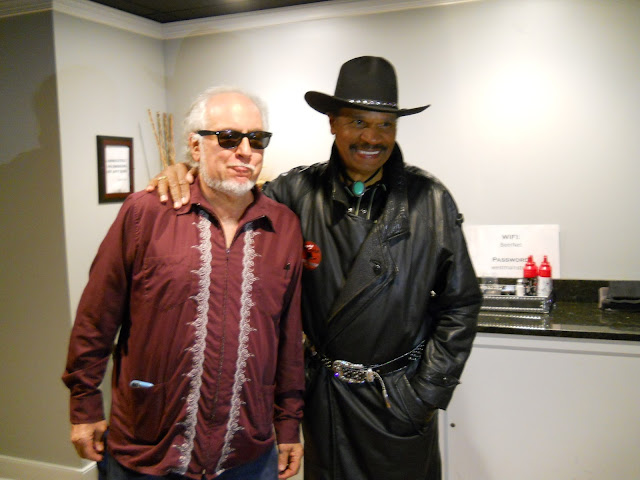 (All photos taken at the show and were deliberately out of focus in order to convey the excitement of live music. So don't send me any hate mail, I get enough already!)
Posted by John at 10:41 AM No comments:

No Shame In Darryl Ellyson's It's Such A Shame

There’s an old expression that one bad break up can lead to a dozen good songs. I don’t know if it’s true, but I have no doubt that personal pain can be turned into art. Hell, the Blues are built on heartache and pain. It’s a universal emotion and the despair that personal pain causes is fuel to a real artist.
Virginia native Darryl Ellyson has just released a new album entitled It’s Such A Shame. I was introduced to Ellyson and his work through a mutual friend, Mark Daniel, a terrific songwriter, musician, singer, and producer. Daniel raved about Ellyson’s work so I was very interested to see what all the fuss was about.
I always approach local acts with a slight tinge of fear. I’m not noted for keeping my opinions quiet and while I tend to only post reviews here on my little soapbox blog, for every one that makes it there is a pile of albums that didn’t. If I don’t like something from someone I see on a regular basis – well, things have occasionally gotten a tad uncomfortable.
Thank goodness this album turned out to be a superior effort with some interesting lyrics, good vocals, and a fine selection of musicians.
All of the album’s 12 songs were written by Ellyson and he is backed by several strong musicians including Bill Roberts on guitars, bass, drums, and keyboards; Todd Ellsworth on bass; Carlos Chafin on drums and keyboards; Kip Williams on drums and percussion; Li’l Ronnie Owens on harp; and Ellyson himself on vocals, guitars, and percussion. Apparently you have to be a pretty versatile musician to play on this album.
The CD starts out with a little ballyhoo with a series of “Well, well, wells,” giving us that old school call feeling. Caused My Heart To Bleed is a solid someone done me wrong song punctuated beautifully by Li’l Ronnie’s harp work.  It’s a good rousing start that’s quickly followed by My First Day (Without You). This one has a nice roadhouse boogie feel and taking the two songs together paints a picture of loss and moving on. Ellyson hooks us with a story before we even know it.
The next selection, Take It Back, has a harder edge to it. It’s darker and moves us into a different direction. I’m intrigued by the differences in Ellyson’s songwriting as he’s utilizing a stronger Chicago sound with this one. The guitar work is more of an instrument of attack than an accompanying ally. Interesting choice.
Sensing that he needs another shift in the mood, he slows things down with a tender ballad, Love Refugees. Here he showcases his voice, and its more mellow registers. This is a slow, hold her close kind of number that gives you a warmer feeling as the singer is moving on with his life. The middle break is lovely.
Newsman Blues is next and it too is a slower number. The lyrics are more resigned, less optimistic and the mood is dark. The song allows the lead guitarist to do a nice power run and for some reason, this song reminds me of an old black and white movie. It kind of grows on you.
The title track, It’s Such A Shame, starts off with almost a pop feel with brighter lyrics and not as dark approaches to the instruments. A closer listen reveals a call for reconciliation or at least for moving on in a positive way. The song signifies a switch in the artist’s approach to the pain in his life.
What’s Gone Wrong continues the lighter approach although the singer is still dealing with the pain. Still questioning why, at least he’s looking for answers without going too far over into the darkness of accusations. Again, the guitar runs are crisp and add kind of a Santana vibe to the song.

Things slow way down on I’m So Worried, as the singer is concerned that his “sweet baby is leaving,” and he’s not so sure how he’s going to be able to cope. Ellyson’s vocals are more powerful, at times they approach gospel fervor.

There is a heaviness in the opening bars of (I Got The) Blues Over You. The pain is almost palpable, you feel them in the ache of the vocals and the bite of the guitar strings. Ellyson’s loneliness is tangible and this is a very strong song. I’ll be playing this one on Time For The Blues.

The piano opening for Raindrops Falling Down is slow and nuanced. By now the offending party has packed it in and left town leaving the singer to deal with the consequences. Somehow, rain just seems to drag us all down.

The album ends with I Don’t Know, almost a Delta feel with Li’l Ronnie again providing some nice harp work. This is a solid old school effort and brings the CD to an optimistic close.

Keep an eye out for both this CD and for any live appearances Ellyson has planned. You can pick up a copy of the album at www.reverbnation.com/darrylellysonbluelightdistrict.


(Photo of Darryl Ellyson blatantly removed from Reverb Nation. If you are the copyright holder and want it to be removed, please notify us and we will comply.)
Posted by John at 12:25 PM No comments: