Told you I would get some pictures going. It was a great time for everybody at PARKFEST 2014.  There we were at Pocahontas State Park - the only state park named for a Disney movie - with perfect weather, good friends and great music. Thanks to everyone who came out to the show and we hope we'll see you next year! 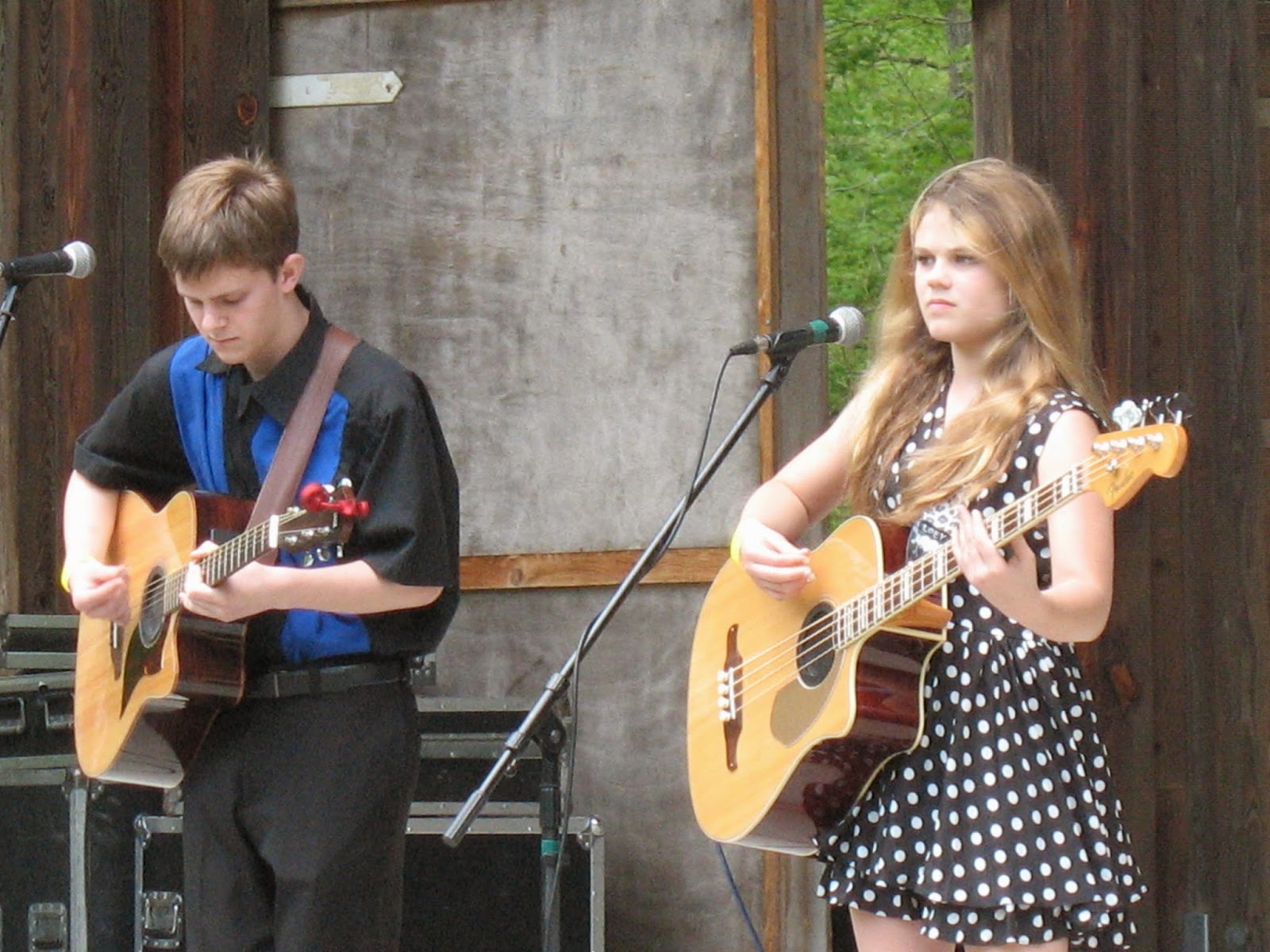 Cole and Logan Layman kick off the show with an amazing set blending several originals with some well chosen classics. Watch out for this duo, they're part of the future of blues! 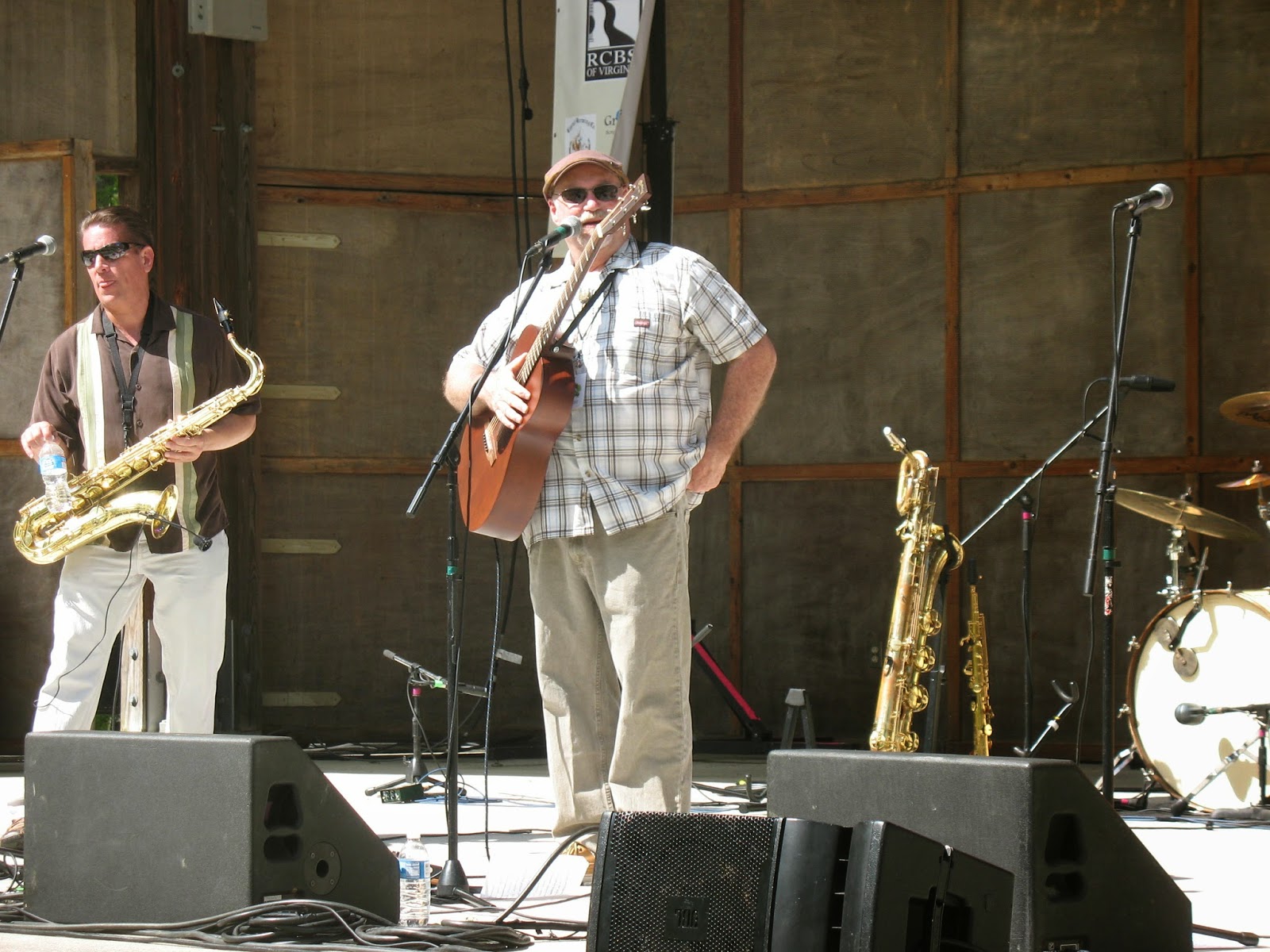 Herbie D with one of the Dangermen looking on. Herbie is always checking out the crowd. 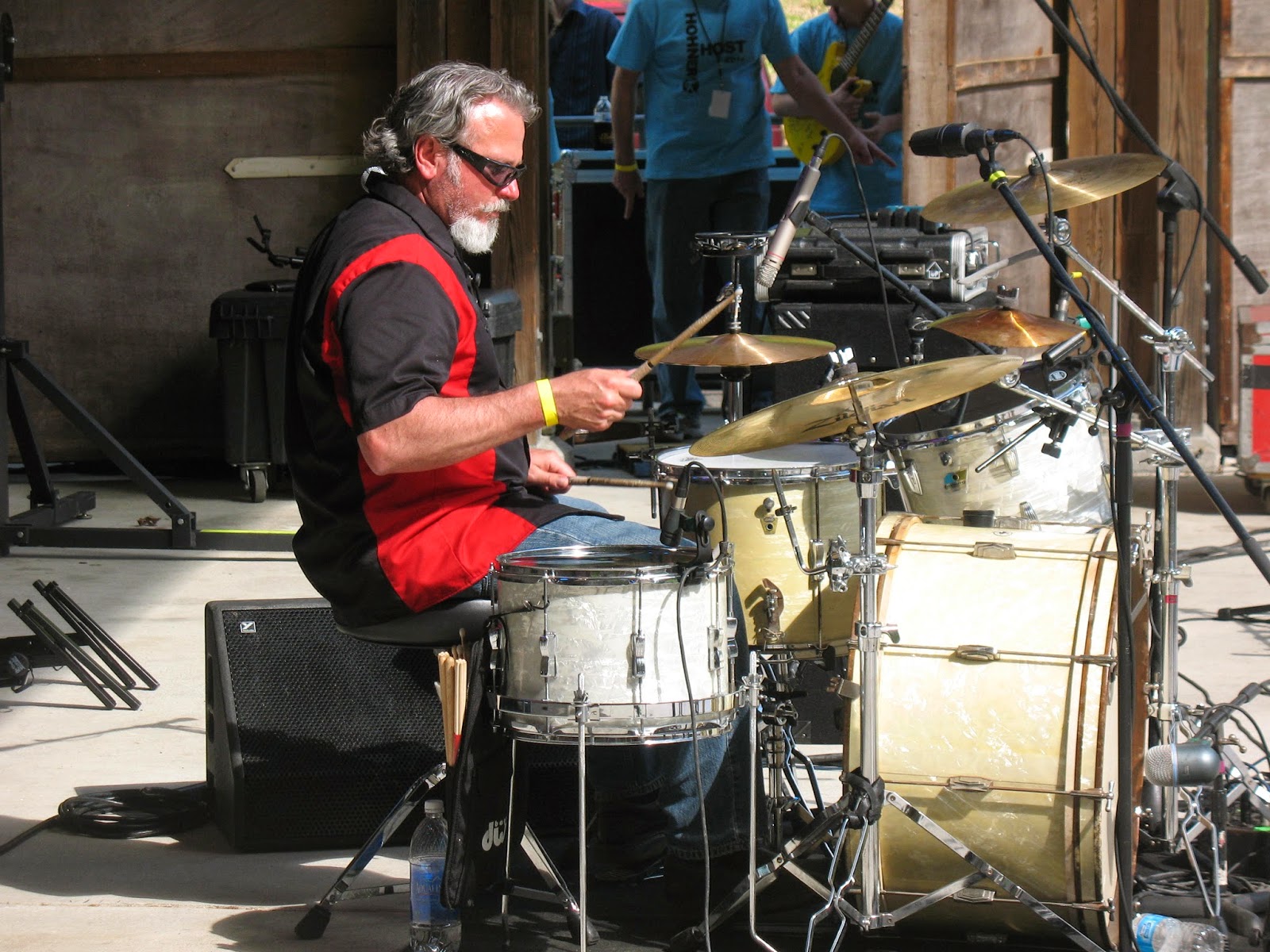 Gotta have that driving rhythm to keep the Dangermen in line! 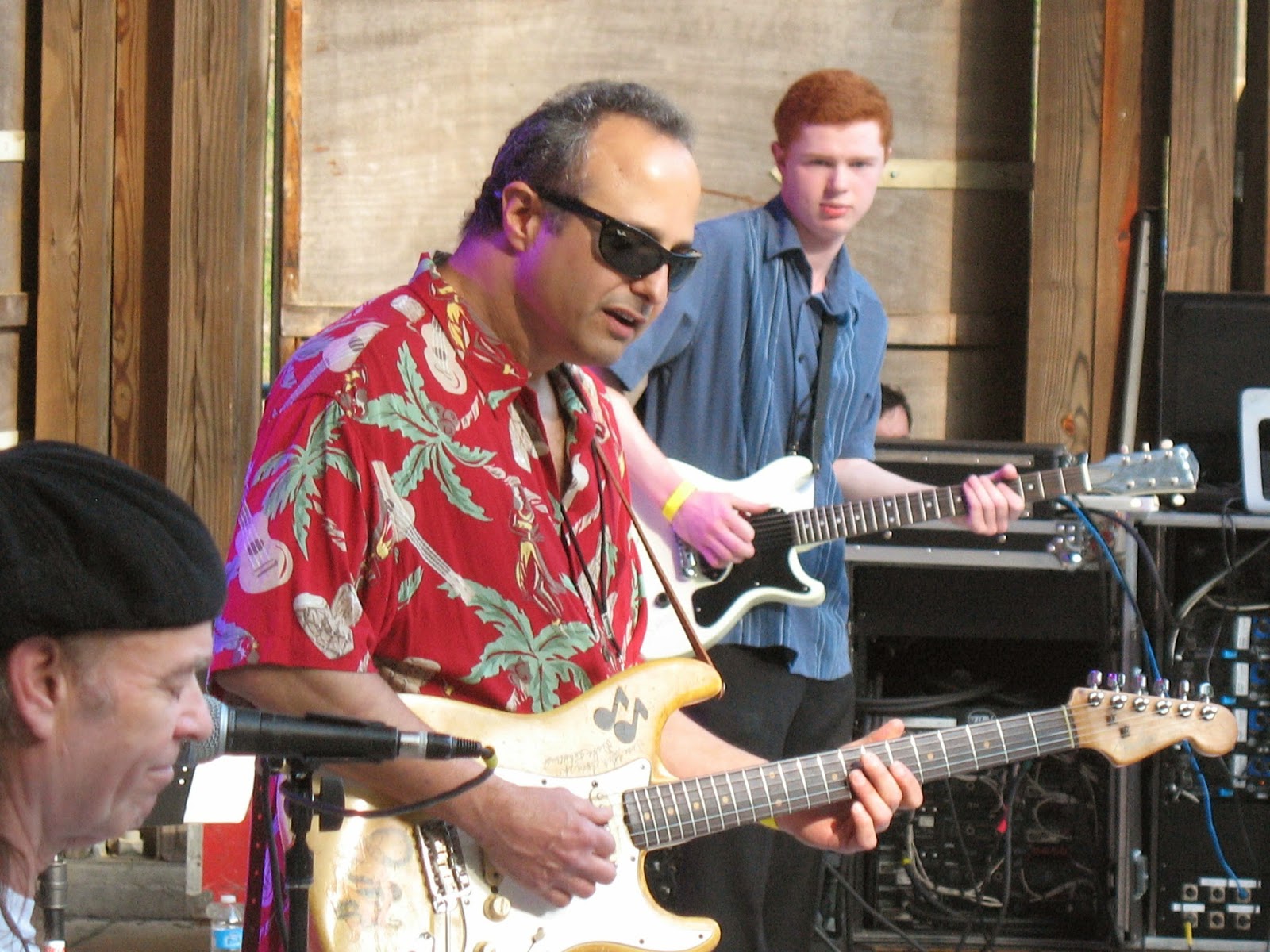 Ivan Applerouth (left) and Andy Poxon (right) trading guitar licks while Julius Pitman adds some keyboards on the side. 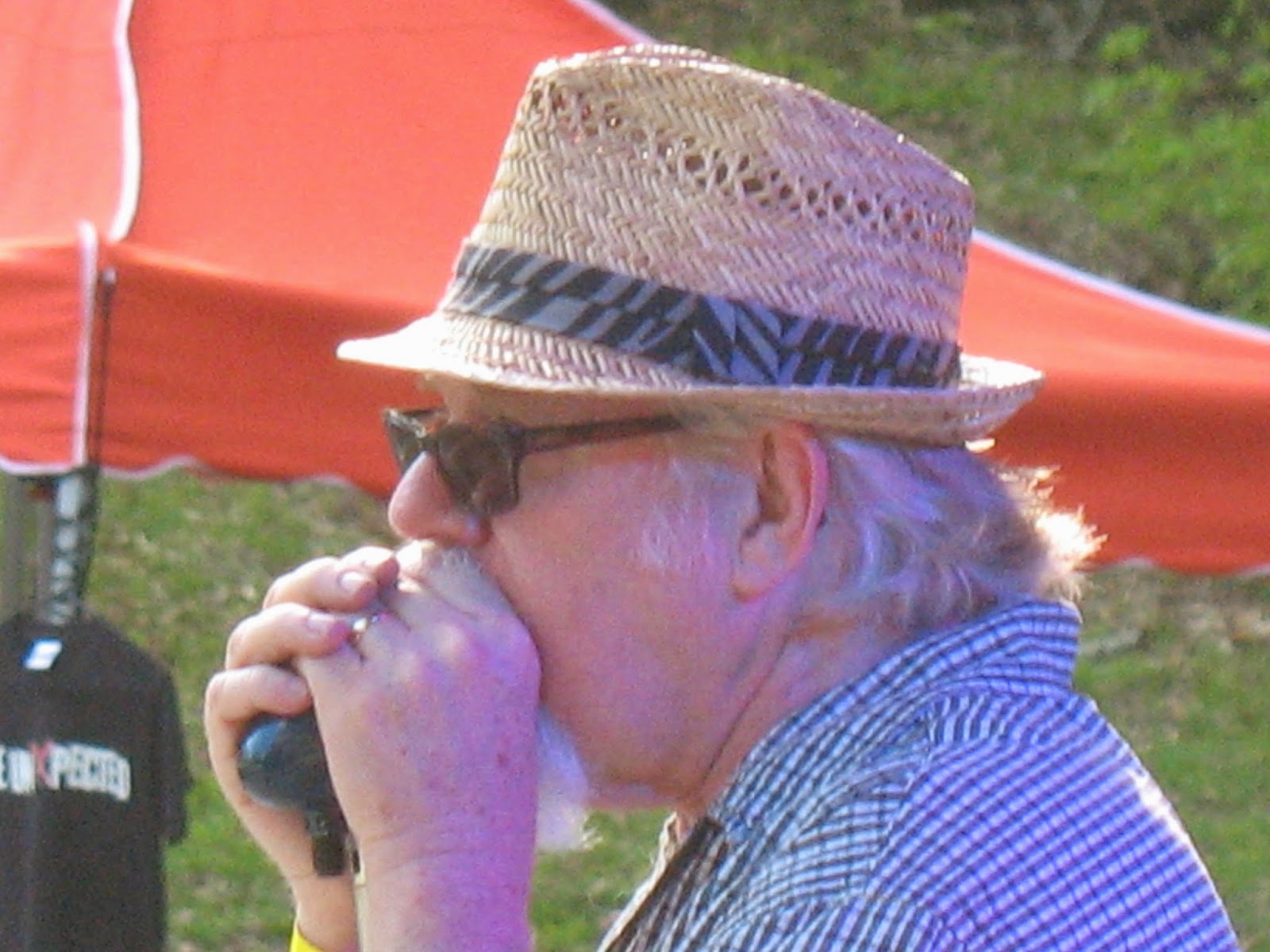 Li'l Ronnie blowing the harp during a driving number. 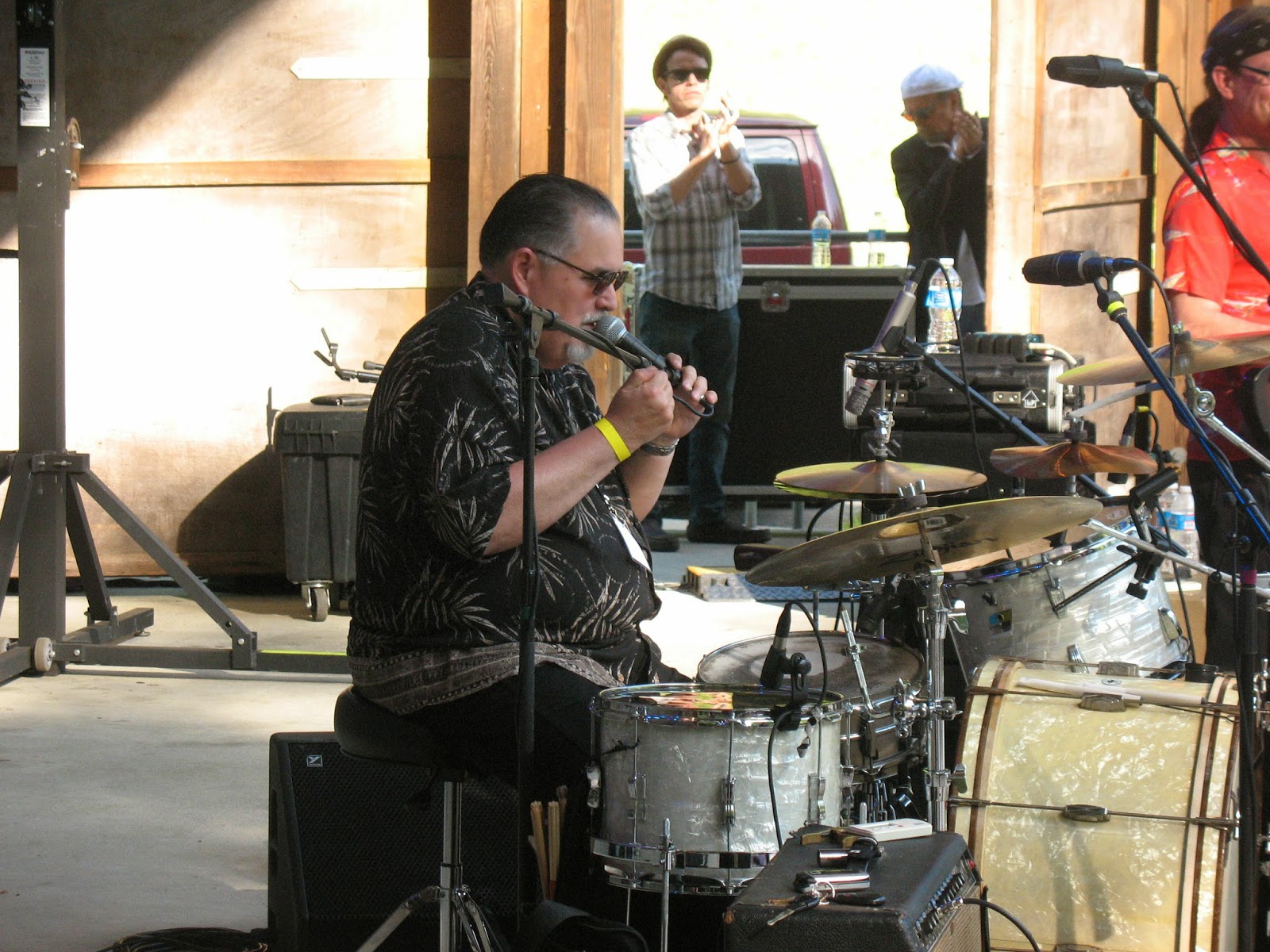 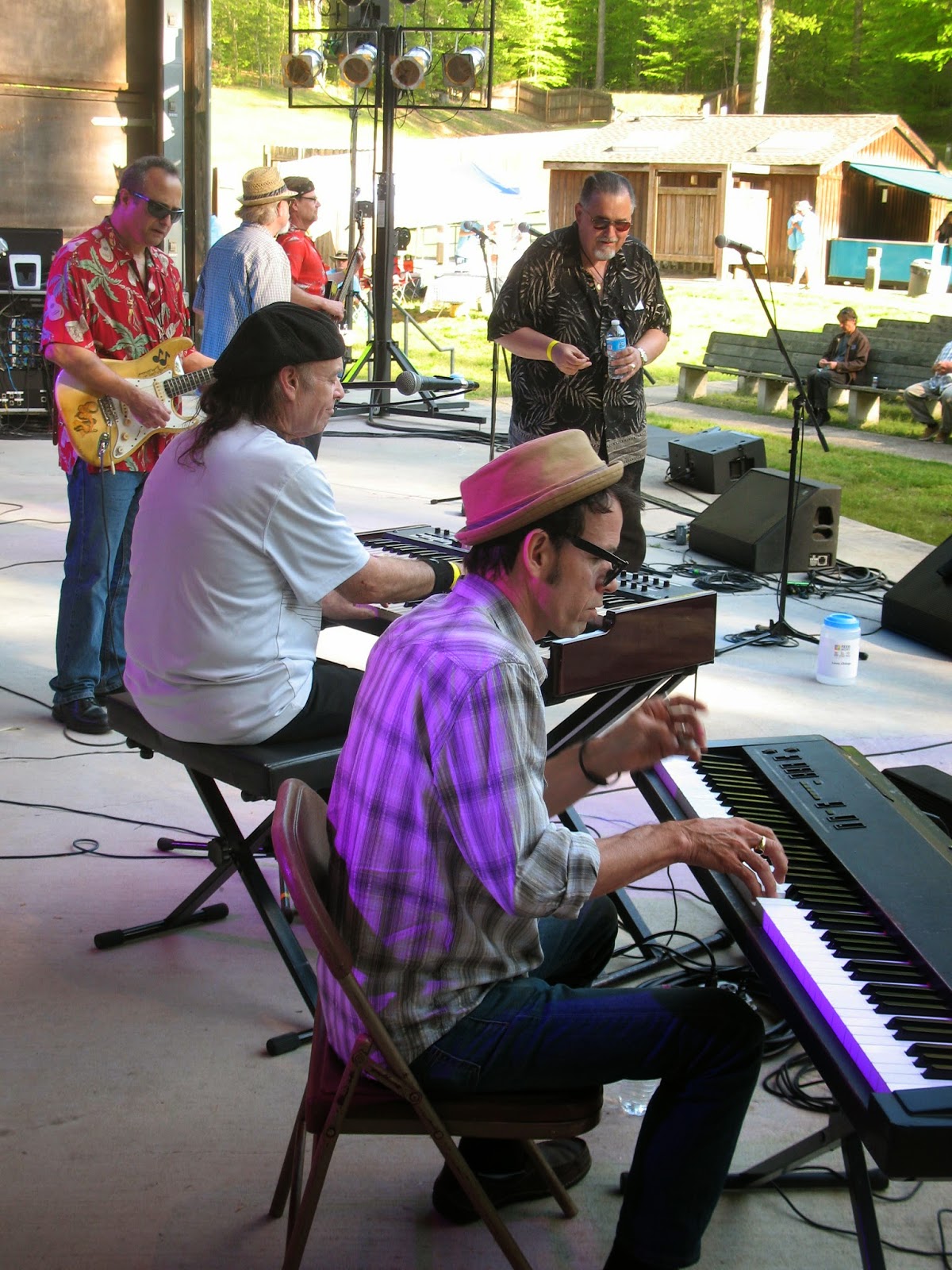 EllerSoul stacking the deck with some great talent. Any chance you get to catch any of these players, grab it! 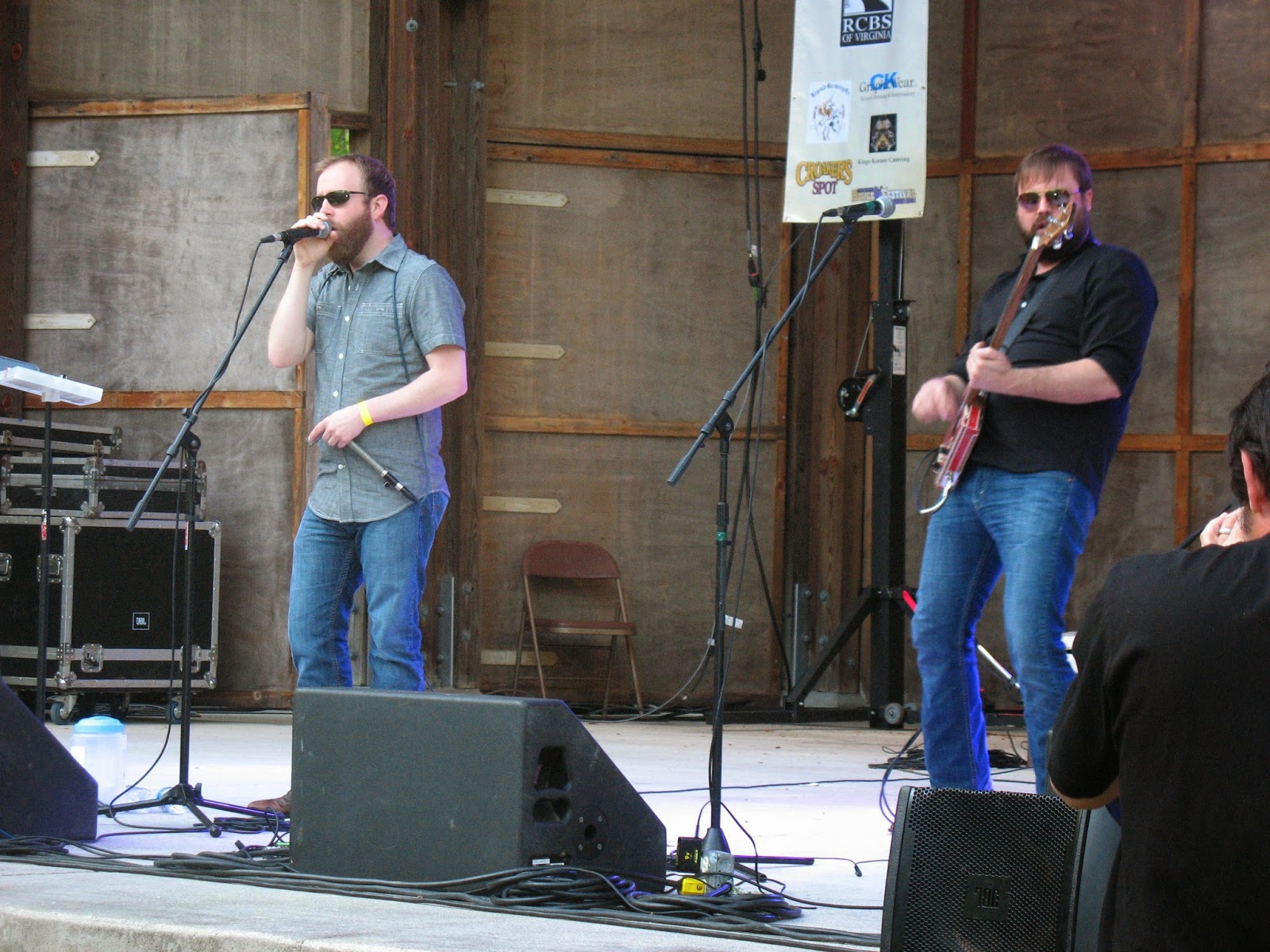 Dustin Arbuckle (left) on Harp and Vocals and Aaron Moreland on Cigar Box Bass. Two-thirds or Moreland and Arbuckle. Kansas based blues that rocks all night long! 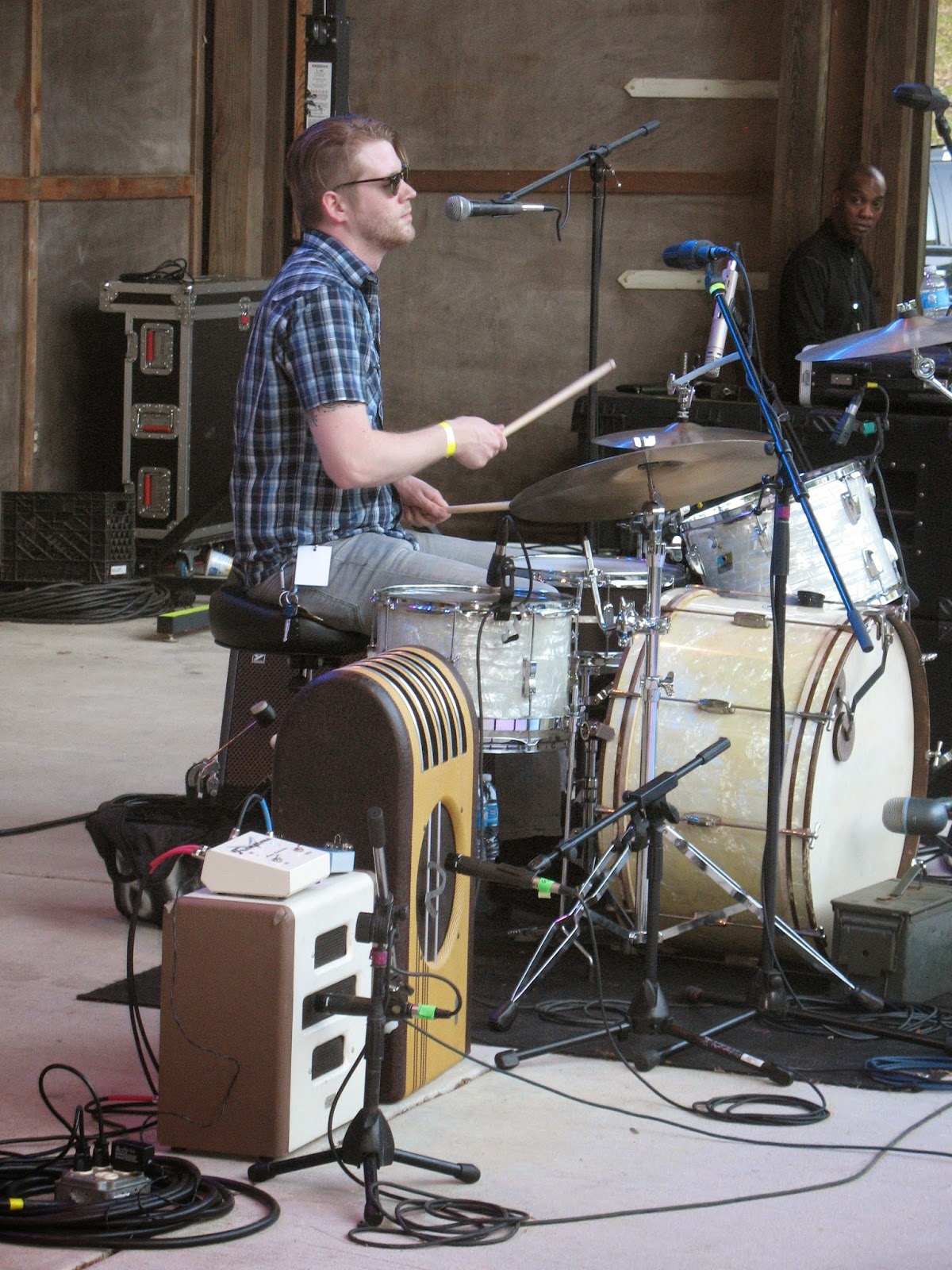 Kendall Newby, the other third of Moreland and Arbuckle. Check out the wild looking amp next to the drum set! 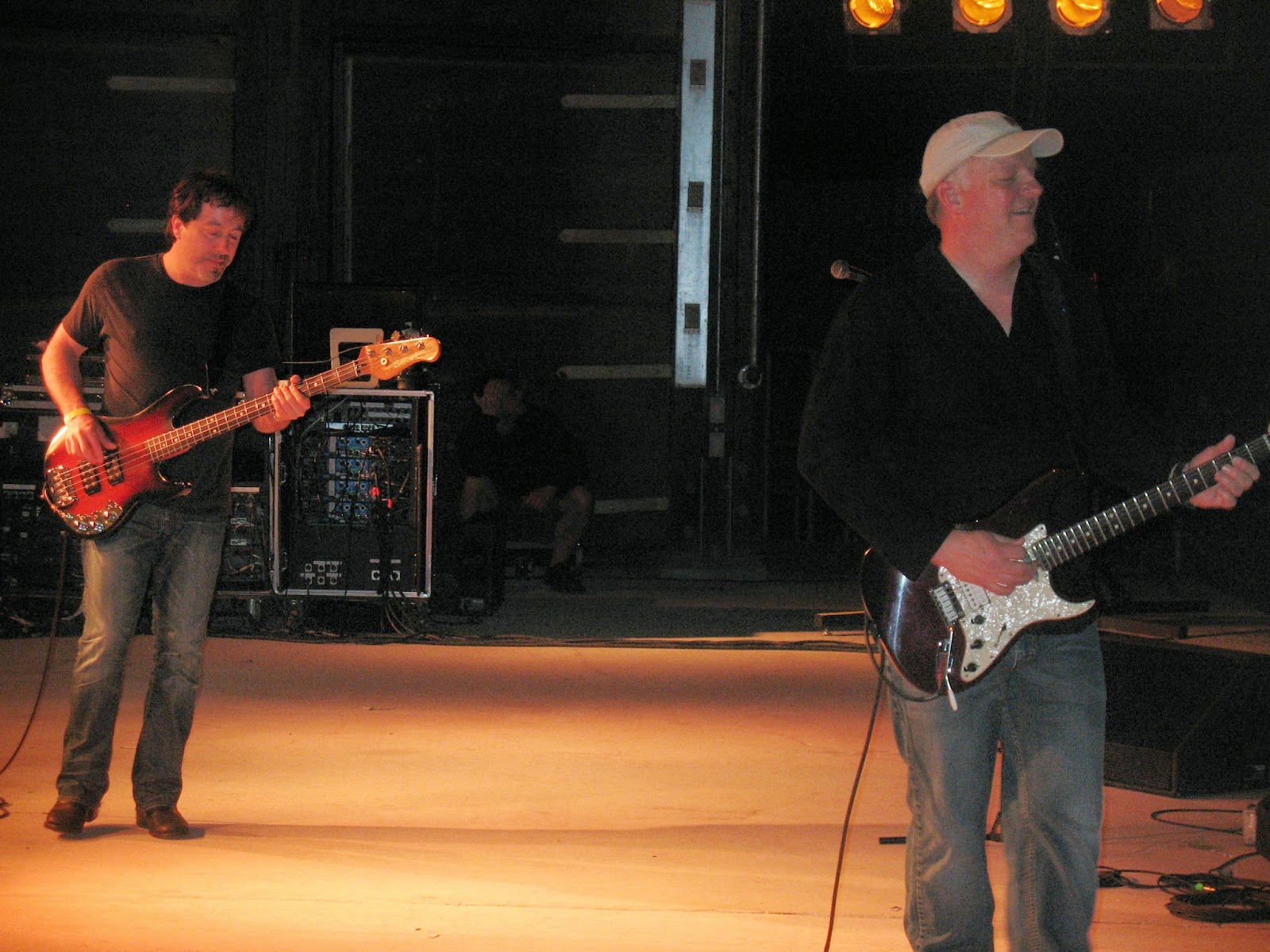 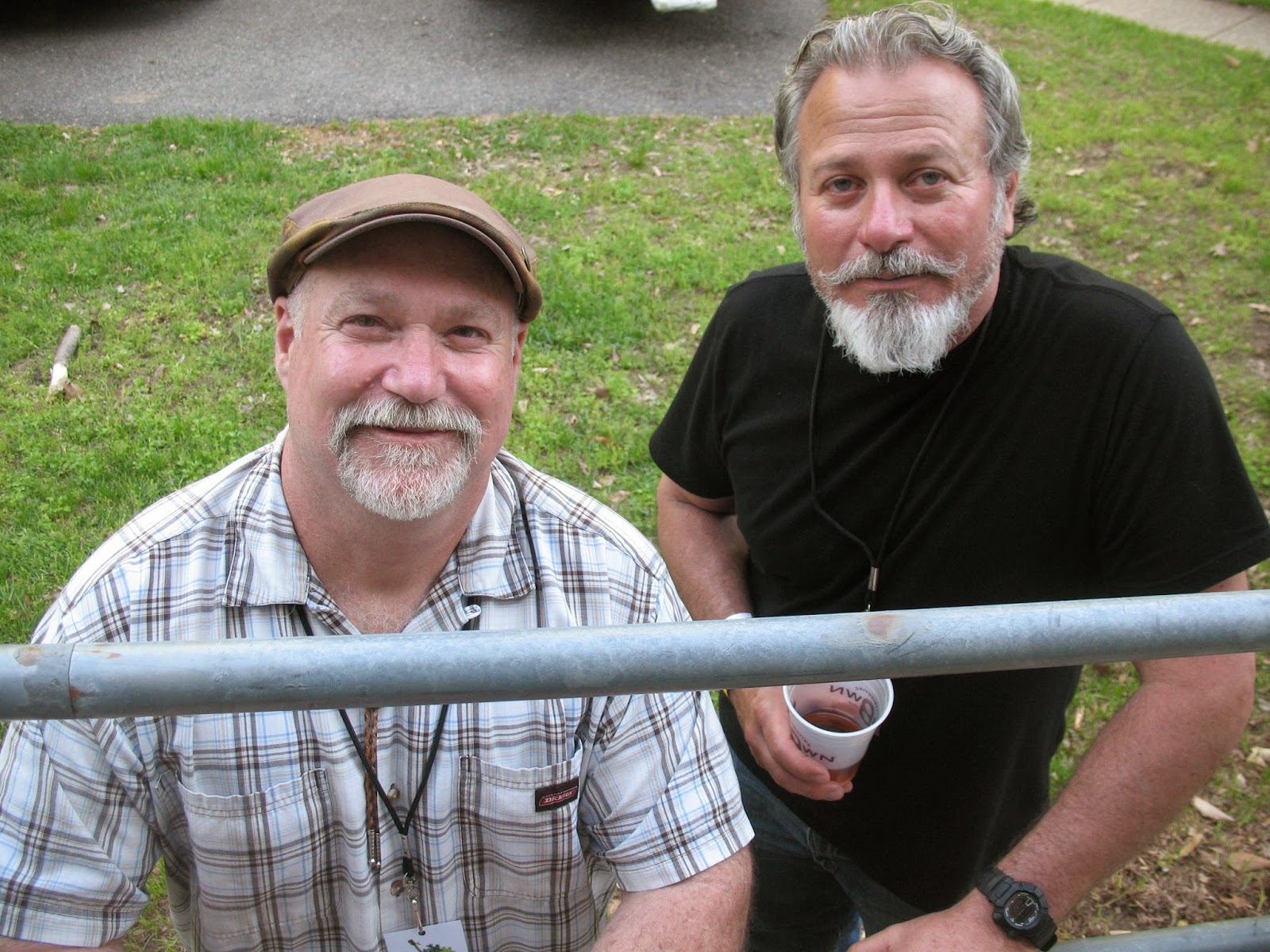 Two of the Dangermen relaxing after their set. Easily the coolest mustache in the park! 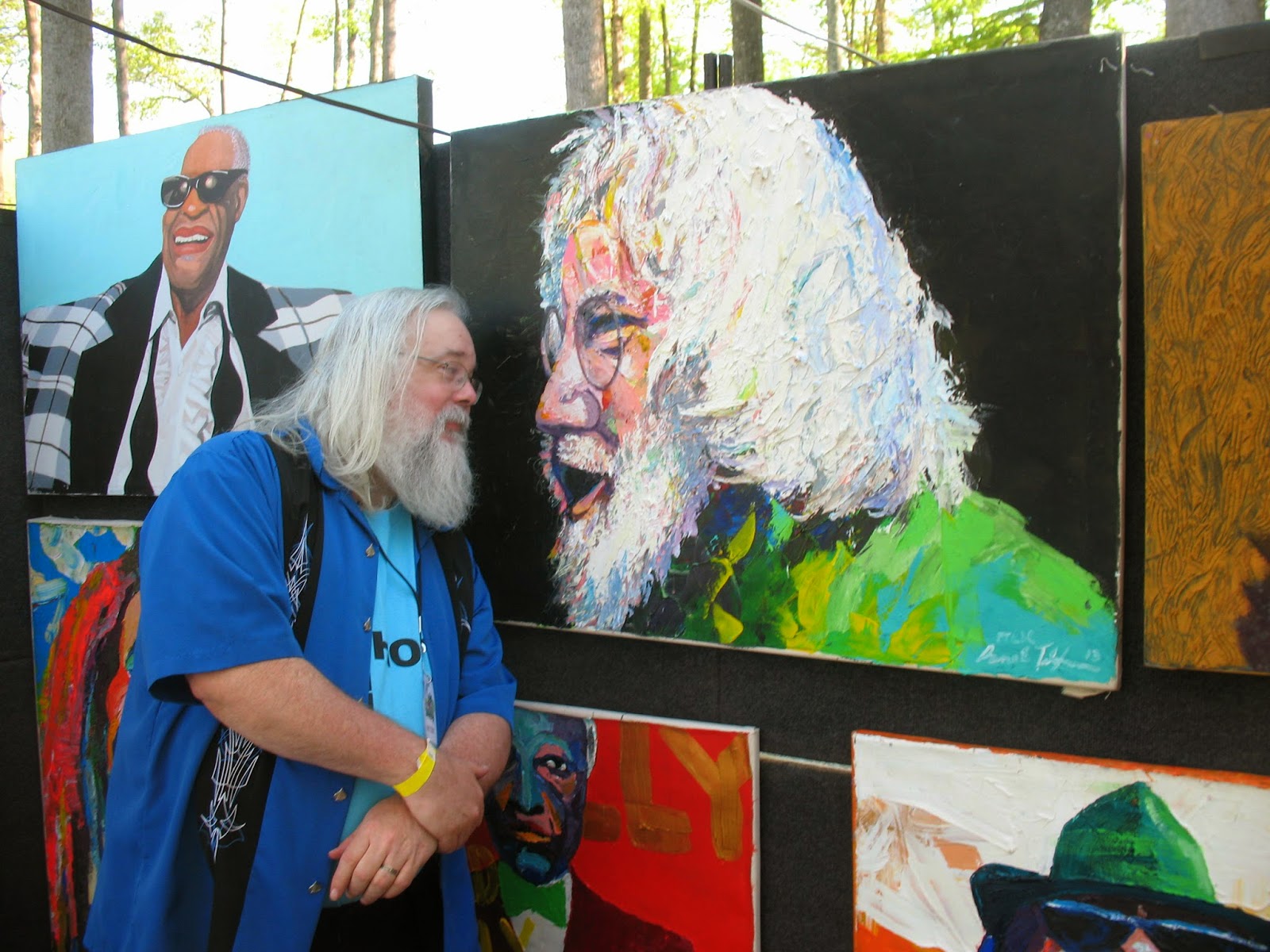 Don't miss a chance to catch live music - especially when you get to hang with all these wonderful people.
Posted by John at 5:52 PM No comments:

Festivals and the Challenge

Hello again from your old friend, Professor Johnny P, celebrating Cinco De Mayo in the traditional way, with a big plate of Swedish meatballs and basking in the glow of a great blues festival put on by my friends at the River City Blues Society. PARKFEST 2014 was a blast with some great acts under beautiful Virginia skies.
If you’re seeing any pictures attached to this entry, you’ve got the revised version. See, I’ve been looking for a download cable for the last couple of days. If you’ve ever listened to the show and heard Henry Cook give me a rash of you-know-what about the condition of my desk – or the back seat of my car – you know that I have a rather casual system of filing.
Usually I just toss things into one of the ever growing piles of stuff that surround me and rely on my phenomenal memory to locate them later.
So I can usually lose important things in less than five minutes.
While I was lucky enough to spend this beautiful day as the emcee for Parkfest, I was even luckier to have my trusty camera with me and the ability to hang out backstage and snap a whole bunch of pictures of the artists.
Anyway, you don’t want to read about my missing cable that allows me to show you these pictures, but I hate spending money to buy something I probably already have two or three times over…. Hey look, I just found my New Year’s Resolution list for 2009 and the very first resolution is “Get More Organized.”
I’ll just file that one over here…
If you’ve never attended a blues festival you need to put that at the top of your To Do List. Fortunately there are amazing shows being put together nearly every weekend from Spring through Fall. And they are not limited to the big city either – you can find them in lots of beautiful out of the way places – and unlike concert venues, you can spread out under the sun or stars and take in great artists with lots of other fans.
If you want to find out all of the great festivals this season, check out the Blues Festival Guide.
Parkfest featured some great bands: In Layman Terms, The UnXpected, Herbie D and the Dangermen, the EllerSoul Blues And Soul Revue, Moreland & Arbuckle, and Albert Cummings. Any one of these acts could be a headliner and to see all of them together was a real treat.
I’ve been fortunate enough to have become friends with the first four acts. I met In Layman Terms (Cole and Logan Layman) and Herbie D and the Dangermen at last year’s blues challenge. (This year’s Challenge is Sunday June 8th and you want to be there to see some great bands and hear some amazing music.) Henry and I had met Li’l Ronnie sometime earlier, but this was no ordinary Grand Dukes show. 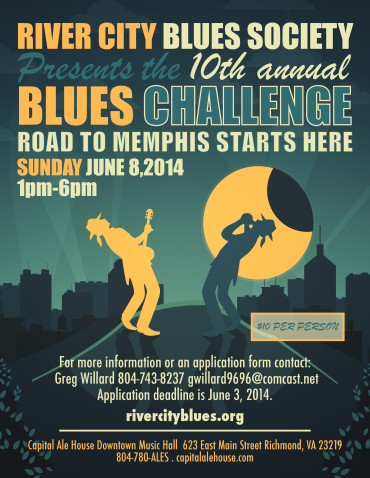 Hell, I would have been really happy with a Li’l Ronnie and the Grand Dukes show, but he put together an all-star lineup with Andy Poxon, Ivan Applerouth, Big Joe Maher, Julius Pitman, and others jamming and playing like they had been together for years.
Trust me, if the Pocahontas State Park had had a roof, they would have blown it off.
I was pretty unfamiliar with the next two acts. I freely admit that I did not know Moreland & Arbuckle at all, but these three guys from Kansas set the stage on fire with their high energy performance. Aaron Moreland played some amazing guitar including a cigar box bass that put out the sweetest sound. Dustin Arbuckle makes Mick Jagger look like Perry Como as he moves around the stage providing good harp licks and solid vocals. Lastly, drummer Kendall Newby provided a very strong presence behind the drum kit and took center stage for an extended solo that had everybody cheering.
Finally, Albert Cummings took the stage with another high powered trio and he held the audience spellbound as they all moved to the front of the stage and dance beneath the stars.
If you missed it, I’m truly sorry. Sometimes you only get the one chance to catch lightning in a bottle, so make sure you’re in the right spot. Support local blues; come join us at the Juke Joint if you find yourself out our way one night.
And be sure to listen to Time ForThe Blues late every Saturday night on Richmond's Public Radio Station, WCVE. And rest assured, I’m already working on a show or two to feature these great performers.

And very special thanks to Karen, Keith, and all the members of the River City Blues Society for making it happen, and letting me come along for the ride.