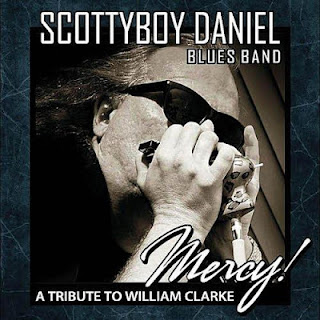 Apparently, even people who don’t know me know I’m a sucker for the harp. I’ve spent many a misspent evening trying to make that little piece of tin sound like my heroes that played it so well. If we’ve got a band playing at the Juke Joint and the crowd is drunk enough, I might be persuaded to get up on stage and play along for a song or two.


If they aren’t drunk enough, I play just to make ‘em go home.


So, it was a pretty cool thing to get in a CD from a group I had never heard of before, and it was even more fun that the leader of the Scottyboy Daniel Blues Band plays a pretty mean harp. And it was the best that this new CD is a tribute to one of the greats, Mr. William Clarke. MERCY is the name of the CD and you can find it at CD Baby, iTunes, Amazon, and Blue Edge Records.


It is well worth checking out, and you better believe a few of these sides are going to end up on Time For The Blues.


The Scottyboy Daniel Blues Band is located in Kansas City, not a bad town for the blues, or for ribs for that matter. I’m thinking about heading out that way on a little vacation, and if they are playing live anywhere in the area, I’ll check ‘em out for you and try to score a copy of their first CD, “Flip The Switch.” If any of y’all have a copy, be sure to let the Professor know how it is.


The band consists of Scottyboy Daniel on harp and vocals, Matt Browning on bass, Jerry Riccardi on Drums, Joe Mika on guitar, and Mike “Shinetop, Jr.” Sedovic on keys. They are supplemented by John “Marx” Markowski on guitar and vocals. You might remember Markowski as William Clarke’s guitarist and his presence adds a real air of authenticity to the album.


There are no writing credits on the packaging so I’m going to assume that these are all Clarke tunes – yes, even the Professor sometimes can’t remember who wrote what. A side effect of growing old. The last song however, “Tribute to William Clarke” is most likely a side written by the band as it’s doubtful that Clarke would have titled it a tribute to himself.


But maybe I’m wrong. Wouldn’t be the first time.


The opening track, “Blowin’ Like Hell,” is a rousing swing jump number and it kicks us off on a great musical journey. Daniel’s harp sings and the band kicks in with a hot little tune that makes you want to get up and dance. We then segue into “Lonesome Bedroom Blues,” something that hits close to us all at one time or another. This is the kind of song many people think of when they think off the blues. The vocals are strong and the harp riffs make excellent counterpoint.


“Lookin’ To The Future” has some more up tempo chops and a good swing back beat. Sedovic’s keys sound nice on this number. “A Good Girl Is Hard To Find” starts out with a nice, slower, jazzy feel. The harp leads nicely into the guitar and the whole song has a retro lounge vibe. The band livens things up with “Drinkin’ Beer.” We’re going to be playing this one a lot at the Juke Joint just to remind people that they are here to listen to good music and have a few libations as well.


“Your Love Is Real” keeps the up tempo swing happening. Sedovic’s keys open with a muted harp for “Love You, Yes I Do.” It’s another good time song – fun to listen to, and probably fun to play. Daniel’s harp fairly screams the opening for “Steady” and the band settles in for a straight ahead driving number. Mercy indeed.


The band continues to rock hard with “Educated Fool,” and this another song that you know they just tear apart when playing live. “Feel Like Jumpin’” slows things down just a little bit and lets us catch our breath for a second. But just for a second, as the song really starts to swing towards the end.


“Tryin’ To Stretch My Money” may be the title for everyone during these economic times. It’s a universal thought for those of us poor slobs who work for a living. It’s also a great tune with a nice old school feel to it. The band pulls out all the stops on “Lollipop Mama,” and they rock it just about as hard as any band around.


The CD ends with “Tribute To William Clarke,” a good song that tries to convey the feeling that Daniel and the band have for this great musician. It’s a fitting tribute to this giant of a man.


William Clarke was only 45 when he left this earth. Sometimes the great talents just can’t stay very long on this dark rock and we have to feel blessed that we have recordings and memories to hold on to. It’s obvious that Clarke was a major influence on Daniel’s work. Clarke’s widow, Jeanette, gave her permission and full support behind the project and we’re the ones who get to enjoy Daniel’s fine CD.


If for whatever reason you are not familiar with Clarke, you need to go buy some CDs PDQ! If you already know his work, this is a very nice tribute album to have in your collection. If you dig the harp, God love you, pick it up and enjoy Daniel’s work. I’ve got a feeling we’ll be hearing more from this cat.